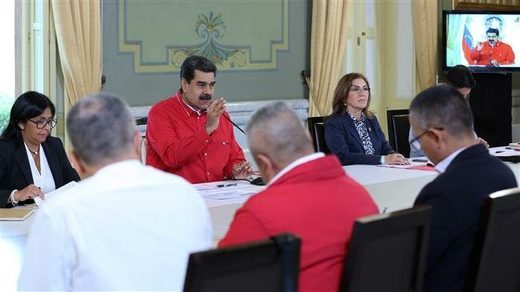 Venezuelan President Nicolas Maduro says he is certain a peace agreement with the country’s opposition will be reached until the end of the year, despite remarks just earlier by opposition figure Juan Guaido ruling out negotiations with the government. In a televised speech on Tuesday, Maduro said, “I am sure that in 2019, we will reach a great agreement on mutual understanding and peace, dialog, and democracy for Venezuela.” He also said his government was ready to continue talks with the opposition in Norway toward “creating a permanent mechanism for talks and [to] search for solutions.” “That process is going well,” the Venezuelan president said. “There will be good news in the coming weeks about how well the contact, negotiation, and pre-agreement processes are going.” He did not elaborate.
Source: Venezuela’s Maduro ‘certain’ peace will come by year-end