US reports more than 500 deaths for first time

Maryland, Virginia and DC all locked down

China plans to announce “asymptomatic” carriers of the novel coronavirus

Dr. Fauci warns he fears virus will return this fall

Tokyo reports another rash of new cases tied to travelers

Update (0810ET): A WHO official said the coronavirus epidemic is far from over in Asia even if the focus of the epidemic has shifted to the US and Europe.

“Last night, Trump said we can save more than 1 million lives by following social distancing guidelines vigorously. President Trump also stated that there are challenging times ahead for the next 30 days and that 1 million Americans have now been tested.”

Sweden reports another batch of COVID-19 cases, bringing its total to 4,435.

Yesterday, the entire Washington DC area was shut down as the governors of Maryland and Virginia joined Muriel Bowser, the mayor of Washington, DC, in issuing “shelter in place” orders (with the threat of massive fines for scofflaws), as the region joined Greater New York, San Francisco and the rest of the Bay Area, Cook County, Greater Seattle and LA County in being completely locked down. 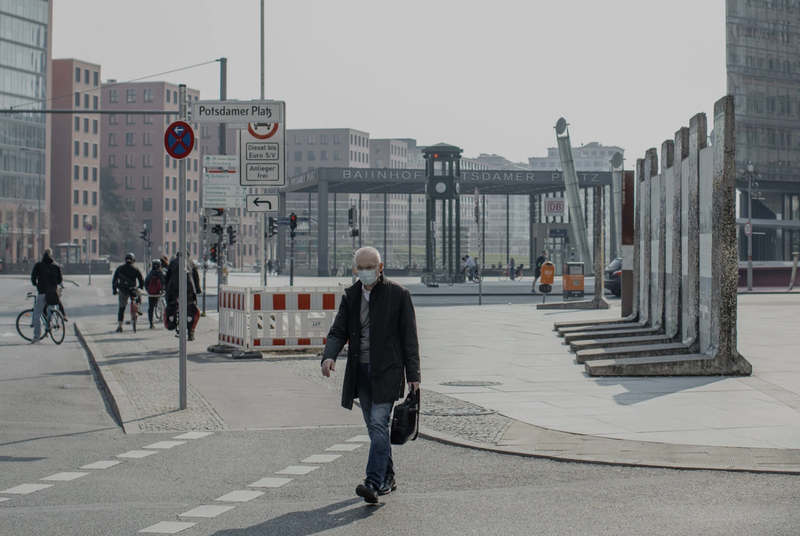 Still, the US case total climbed at an almost unbelievable rate, as the US case total passed 164,000 Tuesday morning, as stock futures traded mildly in the red, though they were essentially flat on the session.

On Sunday, France and Italy also reported their largest single-day jump in deaths, according to their official tallies, capping off a string of ever-higher highs.

On Monday, it was America’s turn, as the US reported more than 500 deaths for the first time, according to reports published early Tuesday.

But it’s not just that: The US has recorded the biggest daily jump in new cases of any country since the novel coronavirus first made the jump from animal to human (or…whatever) in Wuhan back in December. Even as the overall percentage rate slowed, the US still added more than 20,000 cases on Monday, with its daily rate slowing to 14% from 16%, per the FT. Monday also marked the first time that the US reported more than 500 deaths from COVID-19 in a single day, according to the Washington Post. 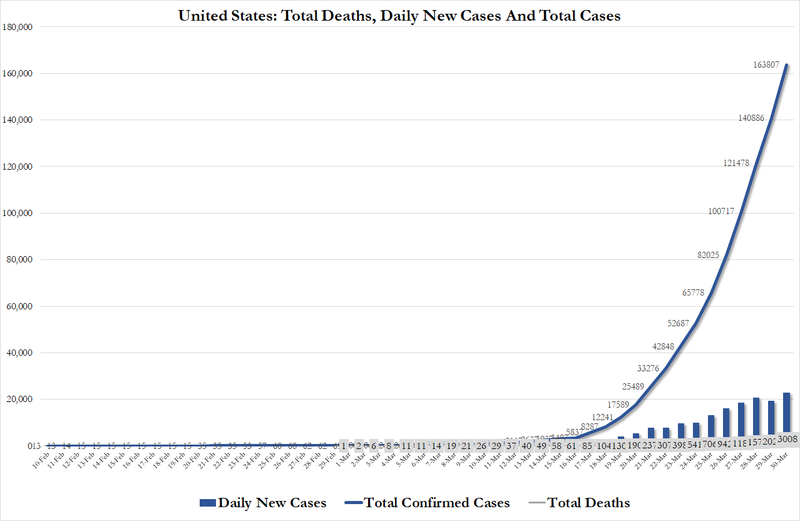 A day after the country started expanding a lockdown first rolled out in Moscow late last week, Russia reported 500 new cases of coronavirus on Tuesday, its largest daily increase by far, as the total number of infections surged 27% to 2,337. While the number of deaths recorded nearly doubled overnight to 17.

On Tuesday, Thailand warned on Tuesday that it would criminally prosecute anyone who claimed to have coronavirus as an April Fool’s Day prank, while, in the US, another individual has been arrested for making a terrorist threat by coughing on them and pretending to be carrying the coronavirus.

Most of the new cases reported in the US yesterday – cases and deaths, that is – happened in New York. In a tribute to medical workers battling the virus on the front lines, the Empire State Building flashed red and white on Monday night to symbolize “America’s heartbeat,” lighting up the top of the iconic building.

The @EmpireStateBldg reminding us that the city is in the middle of an emergency. pic.twitter.com/50TjEjOogN

Amusingly, Beijing announced on Tuesday that it would start disclosing the number of patients who are asymptomatic but found to have contracted the virus. The decision to be more ‘transparent’ with its numbers makes one wonder why China is doing this now? After all, if China were testing on the level of, say, South Korea, it’s possible that you could have seen millions of cases. Is Beijing really going to try and retake the No. 1 spot as the US comes along and starts mass reporting? Or is this merely a ploy to try and make their accounting look more legitimate at a time when even mainstream medical experts are speculating that the true extent of the US outbreak likely won’t ever be known, according to the SCMP.

A new “coronavirus bill” passed by the Hungarian Parliament on Monday granted PM Viktor Orban sweeping new powers to lead the country, the Washington Post reported. Orban now has the power to govern “unchallenged for as long as he sees fit,” a move rights groups said effectively suspends democracy in the European Union member state in the name of fighting the virus, though this isn’t the first time that the “illiberal” whiners have accused Orban of “flexing” his authoritarian tendencies.

Japanese TV station NHK reported Tuesday that Tokyo had confirmed 78 more cases of coronavirus on Tuesday, citing an unidentified government person, marking the fourth or fifth day in a row that the city had reported a surprisingly large bump in new cases, mostly traced to foreigners.

Speaking of infections caused by foreigners, the NHC promised to start including the “asymptomatic” figures starting on Wednesday, as Beijing clarifies that it already asks health workers to record this data, which is…interesting, to say the least.

As of as of Monday, there were 1,541 asymptomatic carriers under medical observation on mainland China, including 205 imported cases, officials told SCMP. Data previously shared with the SCMP suggests that the ratio of so-called “silent” (asymptomatic) carriers to diagnosed sick could be as high as one to three, which would be enough to put China back in the lead for most cases worldwide.

With President Trump finally seeming to accept that hundreds of thousands of lives are depending on what he decides to do with the federal coronavirus response, Dr. Fauci warned Monday night that he is already bracing for a second coronavirus outbreak in the fall, when flu season starts again.

“In fact, I would anticipate that that would actually happen because of the degree of transmissibility,” Fauci responded when a reporter asked about the potential reemergence of the virus in a few seasons.

Also, a troubling caveat: After announcing yesterday plans to build some 50k ventilators in 100 days, Ford and GE, which will be working on a product model by Airon Corp., added that the 100-day clock won’t start until April 20, and it’s likely that most of the ventilators won’t be ready until after the US surge, if one still happens.

To the chagrin of its critics, the US is leaning into its sanctions against the Iranian regime at a time when the Iranian people are desperate, facing an outbreak that far outpaces the country’s ability to control or suppress it. The Europeans, meanwhile, have come up with a counterweight: the German Foreign Ministry confirmed Tuesday that a new ‘financial mechanism’ was used for the first time to export “medical goods from Europe to Iran.” The hope is that the new INSTEX – Instrument in Support of Trade Exchanges – system would shield the involved parties from US sanctions that have hampered Iranian efforts to import medicine and other medical supplies. It essentially operates as a clearing house for trade credit points.

The announcement came as Iran confirmed 141 new coronavirus deaths and over 3,000 new cases within the last 24 hours on Tuesday morning. At least 2,898 people have died in the country already, authorities said. INSTEX was a critical piece of EU efforts to preserve the JCPOA – better known as the Iran deal – following the Trump Administration’s decision to torpedo it.

The CDC is also reportedly considering a plan that would see them adjusting the official guidance to ask consumers to always wear masks when they leave their homes. According to WaPo, which first reported the issue, the issue is still “under review.”

For the third day in a row, Spain on Tuesday announced 849 coronavirus deaths over the last 24 hours, marking another record ‘deadliest day yet’ in an outbreak that has now taken 8,189 lives in the country.

Finally, Beijing has a message for uppity American politicians who expect China to pay any kind of penalty for unleashing this medical monstrosity on the world.

Want China to compensate for US’ losses in the pandemic? 1. It has no legal basis at all. 2. China today is no longer a country that the US can willfully coerce and extort. A few US politicians, they better stop dreaming.

As more hot spots emerge in Michigan, Louisiana and elsewhere, the FT followed up the NYT by publishing a lengthy feature about the outbreak in poverty-stricken Detroit. The FT story included the following quote, from the administrator of an area hospital, who offered a rare piece of optimism: his hospital is “nowhere near” having to ration ventilators, he said, adding: “I think it’s highly unlikely we will get there, I think the lockdown is working – even though some people still have no clue what’s going on. The $20m question is what happens in 2021. I think it smoulders all year and then comes back.”