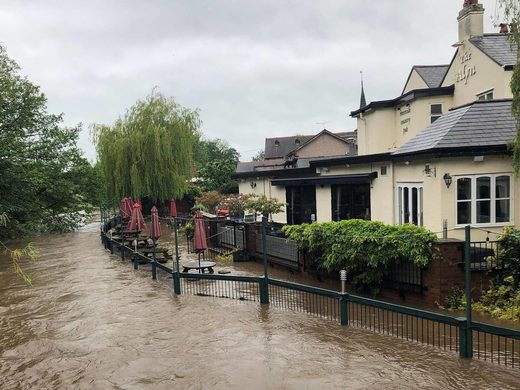 Swathes of UK, from Dorset to Northumberland, face big mop-up Homes were evacuated and rail services were disrupted as torrential rain brought flooding to parts of England. The RAF was called in at Wainfleet, Lincolnshire, when the River Steeping burst its banks after three days of downpours, with water reportedly rising to about 2ft. People were forced to leave about 100 homes. The county council issued a state of emergency, saying the flooding posed a risk to residents, and the RAF was asked to plug the breach in the river bank. Lincolnshire and Shropshire were among the worst hit counties. But with many areas across the north of England and Midlands also being drenched, passengers became stuck on a flood-hit train in Northamptonshire.
Source: UK floods: Homes evacuated in state of emergency and travel disrupted