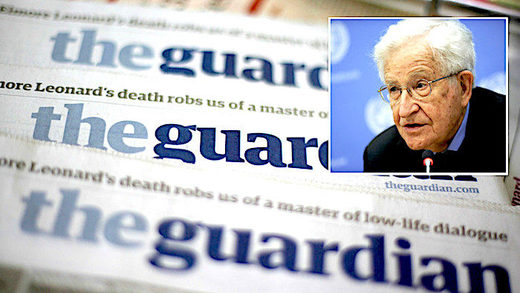 The Guardian is coming under fire for not reporting on renowned intellectual Noam Chomsky’s comments on Labour’s anti-Semitism row, with social media users accusing the outlet of hypocrisy. Chomsky said that the allegations of anti-Semitism against party leader Jeremy Corbyn and MP Chris Williamson are a “disgrace” and an “insult to the memory” of Holocaust victims. The Guardian has in the past reported on many of Chomsky’s comments, but has chosen to ignore his latest take on a current issue, leaving many wondering if it is conveniently selective about which of his comments it deems newsworthy. Independent journalist Matt Kennard noted that RT, the Morning Star, and the Canary were the only news organizations to cover the esteemed intellectual’s remarks. “The mainstream media is running a campaign where contradictory information is just erased from record. The Guardian is at the forefront of this campaign,” he said.
Source: The Guardian accused of ‘vendetta’, ignored Chomsky’s Labour anti-semitism comments