Stocks Slide As CDC Confirms 53 Cases In The US 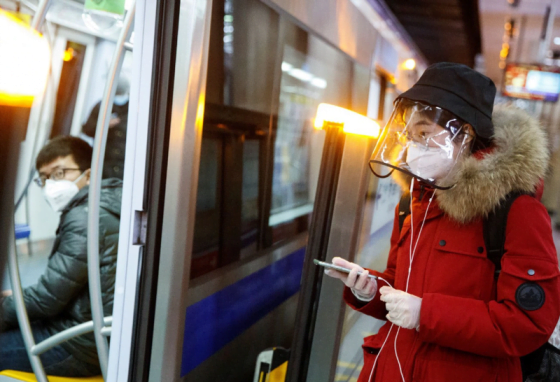 Update (1220ET): US stocks took another leg lower, falling to their lowest levels of the session with the Dow down 1,000 points, following the latest headlines out of the CDC confirming 39 cases of the virus have been detected among the rest of the ~300 individuals from the ‘Diamond Princess’.

The CDC reportedly opposed the State Department’s decision to allow 14 individuals who were confirmed to be infected to travel on the evac flight after their cases were confirmed just before takeoff, thanks to one of the many botched, drop-the-ball moments attributed to Japanese health officials.

This is exactly what they warned about: In addition to the 14 people who were already infected, it appears another 25 were infected on the flight back – where the sick individuals were separated by the rest using duct tape and a thin tarp-like sheet.

That brings total US cases to 53.

Meanwhile, the CD isolated 14 cases outside those who caught the virus aboard the DP.

Six of these cases are believed to be in San Antonio, according to local press reports.

Update (1215ET): Just figured we’d point out: While WHO warns that there’s nothing to fear, Beijing is trying to force its population back to work after six provinces outside Hubei lowered their emergency ratings earlier.

That push has led to more scenes like this one:

Update (1115ET): Shortly before it voted to postpone its annual national congress, the Standing Committee of the National People’s Congress in China passed legislation approving a crackdown on the illegal wildlife trade on Monday.

Though SJWs have insisted that criticizing Chinese practices like eating ‘bat soup’ is ‘racist’, WHO scientists warned Monday morning that initial research suggests that the virus was transmitted to the first human cases via consumption of a bat, or possibly a pangolin that had been exposed to the virus via a bat, WaPo reports.

We published an explainer about how the wildlife trade, which has been illegal on paper for years, managed to flourish in the Chinese countryside as a king of grey market due to its immense profitability.

Now, it appears local farmers will be forced to return to growing crops, a far less lucrative trade than hawking bats and snakes, apparently.

Update (1015ET): As the White House prepares to request an emergency spending package from Congress as soon as this week – a package that could seek close to $1 billion, as we’ve previously noted – WHO’s Dr. Tedros said during the organization’s Monday morning press briefing that the outbreak isn’t yet a true “pandemic” because the world hasn’t seen “large-scale deaths”.

That’s right: On the same morning that the Chinese government is marching people back to work, warning them that if they get infected, they’re on their own, as if the entire country was one giant concentration camp, the WHO – which has repeatedly run interference for the regime – is insisting that the outbreak isn’t really that bad.

The cases in Italy and South Korea are definitely concerning he said, but are we seeing an uncontrolled outbreak? No. 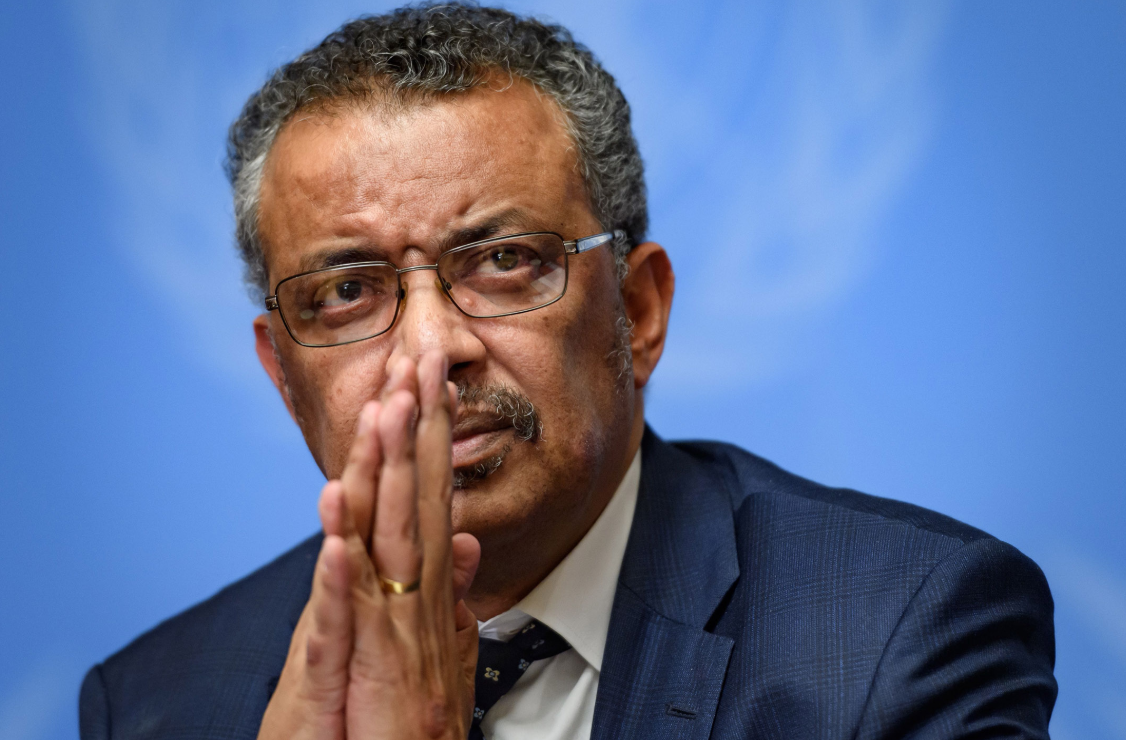 An Iranian lawmaker just blew the whistle on some 50 deaths in Iran, and now suddenly cases are popping up all over the Middle East and Europe, and the situation isn’t really that bad.

But Tedros says we’re not witnessing “uncontained global spread” and that “using the word pandemic does not fit the facts. We must focus on containment while preparing for a potential pandemic.”

All nations battling the outbreak should prioritize three areas, Dr. Tedros added. These include the safety of hospital workers, communities most at risk like the elderly, and others with co-occurring health conditions.

This comes nearly one month after the WHO declared the outbreak a global public health emergency.

And this is what the curve looks like for cases outside China: 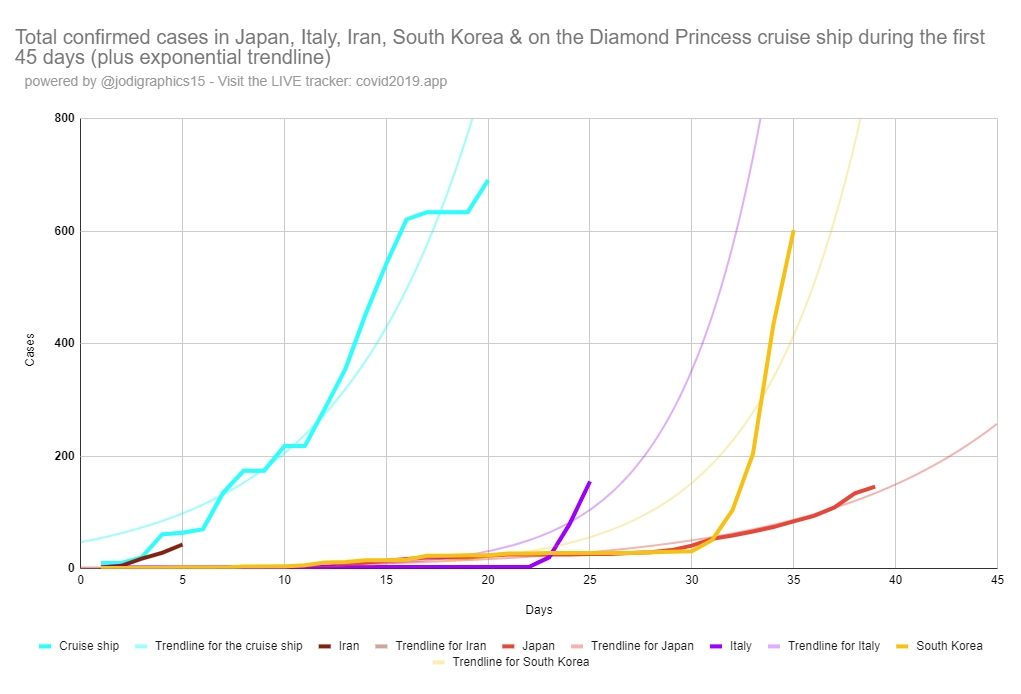 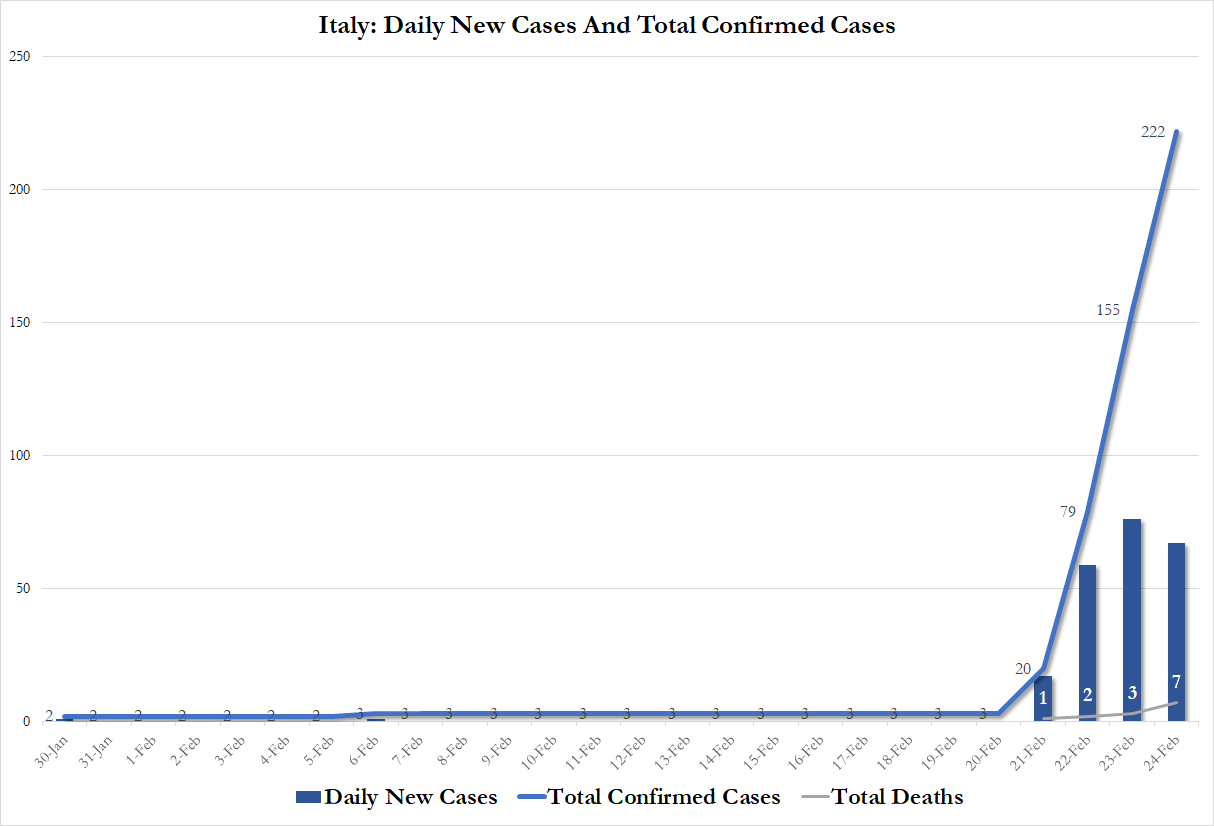 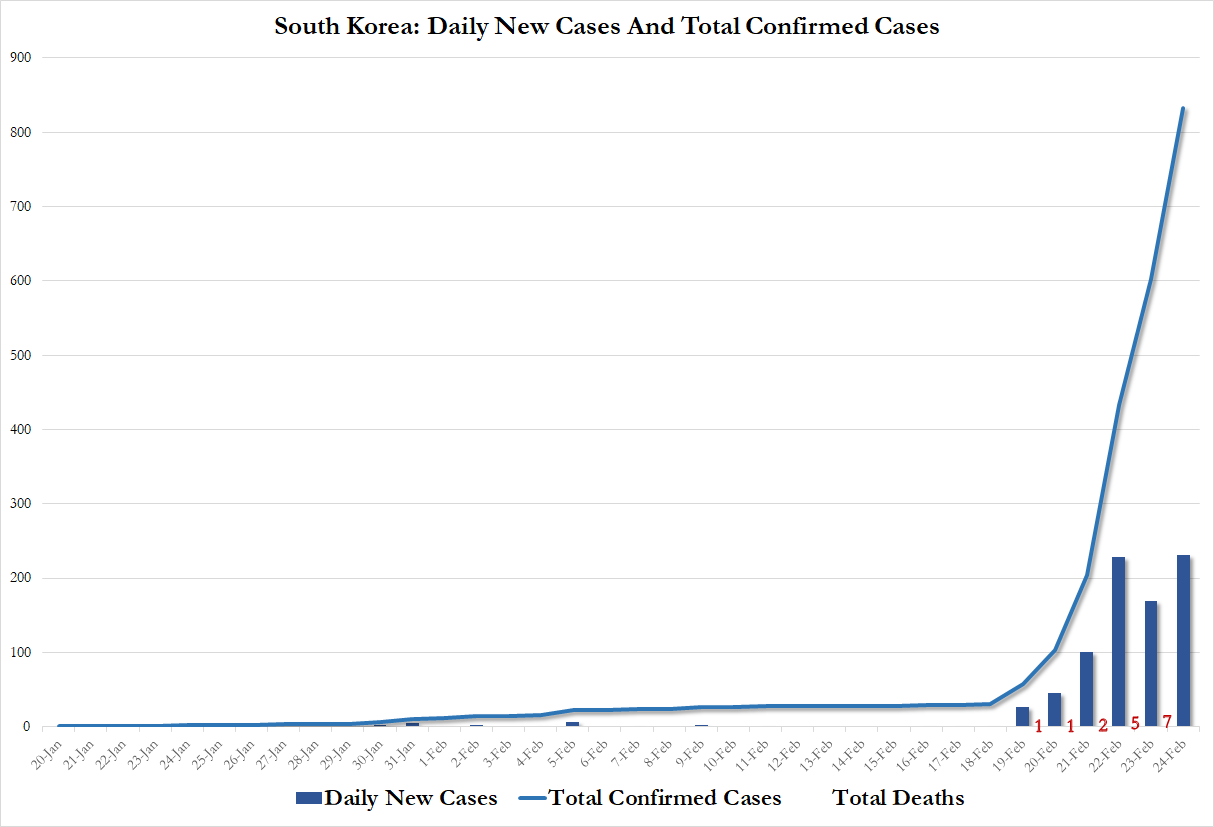 Nothing to see here, gentlemen. Please, focus on the excellent dip-buying opportunity in front of you.

Finally, repeating some of his florid praise from the early days of the outbreak, Tedros said: “other countries need to learn from China’s response”. Which we presume means that medieval lockdown is the way to go – but if you can tweak one thing, maybe try to get on top of the situation a little sooner.

Meanwhile, as Stars & Stripes reported earlier, US soldiers in South Korea are doing everything in their power to prevent an outbreak on an American base – a huge risk for US national security officials and the Pentagon – after the widow of a retired soldier who recently visited stores on a base in the southeastern part of South Korea.

* * *
Update (1000ET): Following this morning’s WHO circle-jerk, where the team of foreign doctors and experts refused to challenge Beijing’s narrative despite widespread skepticism and criticism of the government’s early decision to censor information about the outbreak, the Global Times editor-in-chief has just declared that the “risk of the virus spreading widely in China” has passed.

The risk of virus spreading widely in China has passed. Wuhan is still in lockdown while new infection cases are steadily decreasing,even disappearing, in other areas. Situation in countries such as S. Korea is worse than China. Global trade&travel could fall to large scale chaos 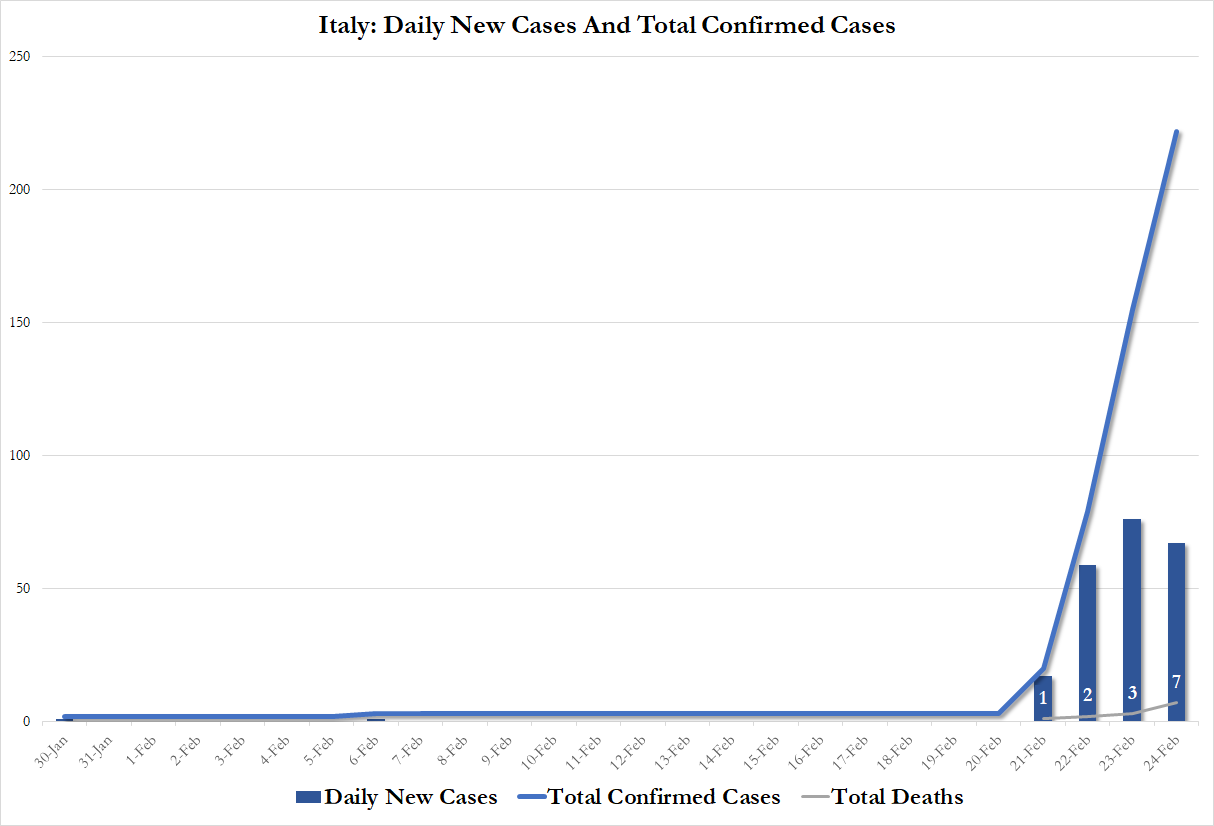 Update (0910ET): The coronavirus is already forcing Iranians to tweak certain practices, including their daily greetings.

Meanwhile, the first indications that the virus has already spread from Iran to some of its regional neighbors have already emerged: Oman has reported the first two confirmed coronavirus cases. The two cases are individuals who recently visited Iran.

Update (0835ET): As the WHO team wrapped up its Monday press conference with what was essentially tantamount to a global confidence-building exercise in China’s response, a senior official from China’s National Health Commission said the coronavirus risk from Wuhan had gone ‘way down.’ 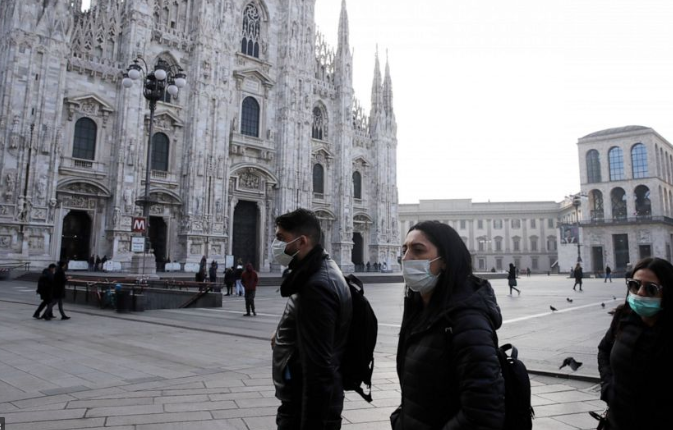 Of course, if that’s true, then why did officials cancel a planned easing of the lockdown?

The official added that China has managed to stop the ‘rapid rise’ of infections in Wuhan, though they haven’t stopped the epidemic yet, and that the situation remains “grim and complex” – as President Xi said over the weekend.

Meanwhile, over in Italy, ANSA reports that a sixth person has died.

Even more alarming for futbal fans across the country: Four Serie A matches were postponed on Sunday, while others on Saturday went ahead.

When American traders logged off on Friday, they might have noticed a few suspicious headlines out of Italy reporting a sudden spike in cases. But anybody who spent the weekend away from their desks and Twitter might be surprised to find that Europe’s third-largest economy is now host to a genuine crisis.

As we reported over the weekend, more than a dozen towns in Lombardy – the hardest hit region with 167 confirmed cases and 4 deaths – are on complete lockdown. According to the latest update, there are now 219 confirmed cases in Italy, as well as five deaths.

Angelo Borrelli, head of the country’s civil protection agency, said Monday during a press briefing that another 91 people are currently in isolation inside their homes.

Following the weekend spike,  Italy’s neighbors are getting nervous. Austria is exploring border controls, though Germany said Monday that it’s not currently considering closing its borders with Italy, an obvious attempt by the de facto leader of the EU to try and quell a continent-wide panic. 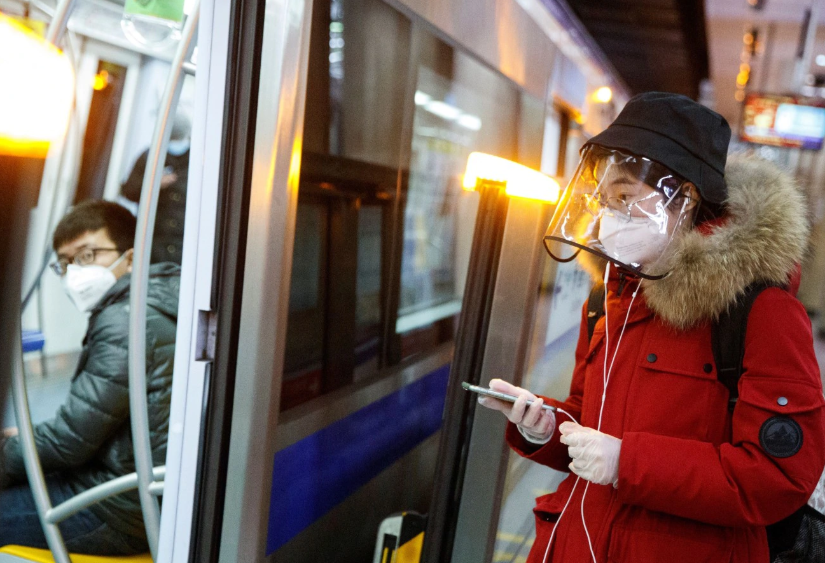 Elsewhere, more countries are tightening restrictions on South Korea. Hong Kong on Monday declared that it would stop non-residents from South Korea from entering Hong Kong.

This has sparked a bemused response from Hong Kongers on twitter:

Our fucking Hong Kong government has just announced that South Koreans will not be allowed to enter HK starting at 6 am tomorrow, but our fucking government has always allowed people from China to enter. What the hell is this going on?

A recent poll showed that a majority of the people in Hong Kong don’t trust the data provided by the Chinese government or the WHO.

In Italy, it seems like most of the dead fit the profile of elderly patients with co-occurring health problems. One of the two most recent deaths was reported to be a man from the village of Val Alzano Lombardo. He died at the Papa Giovanni XXIII hospital in Bergamo, near Milan. The hospital said the 83-year-old man (reports on his age differ) had a serious underlying health problem, but it didn’t specify what it was, according to CNN.

As WHO officials finished off preparations for their big press conference Monday morning, Beijing announced that it would delay the National People’s Congress, which had been set for early March. The move was telegraphed by leaked media reports well in advance.

Officials said Monday the key political meetings, originally due to take place from March 5, would be rescheduled. Analysts said the government in Beijing was worried about the optics of holding a large-scale public event while millions are living under lockdown. We agree – that would not be a good look for the CCP right now, especially after all of those videos of police rounding up violators of the lockdown who were probably just trying to find something to eat.