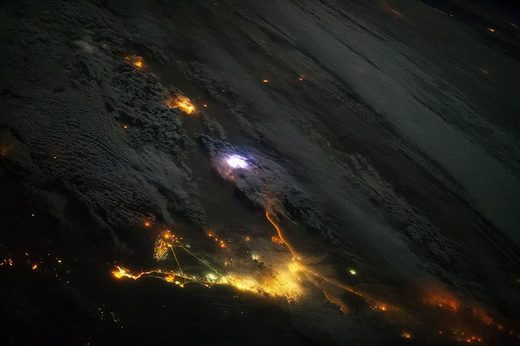 A cluster of cameras peering down at Earth from the International Space Station has spotted hundreds of gamma-ray flashes going off in the hearts of thunderstorms over the past year. By comparing those enigmatic flashes with lightning rippling through the same storms, space physicists have begun to unravel the decades-old mystery of what causes the high-energy bursts. The researchers have found that the bursts, known as terrestrial gamma-ray flashes (TGFs), form when powerful electric fields course through the atmosphere, just before a lightning bolt travels along the same path. The charged electrical particles interact with the atmosphere to produce a super-fast flickering of gamma rays, which cannot be seen by the naked eye but are visible to the specialized cameras looking down from the space station.
Source: Space-station cameras reveal how thunderstorms trigger gamma-ray bursts