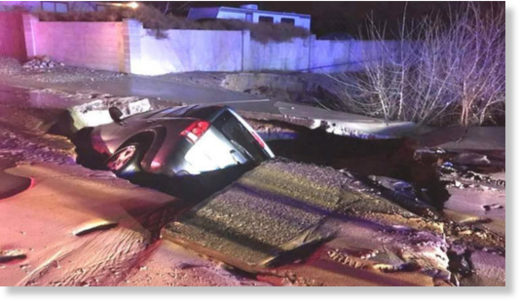 A New Mexico driver’s Friday morning commute turned nightmarish after their car was swallowed by a sinkhole. The sinkhole opened up on a street in Rio Rancho. The town’s fire department posted an image of the car on its Facebook page, which shows the vehicle resting on its side in the sinkhole. Rio Rancho Fire Rescue said the driver was able to self-extricate and was not injured. KOAT reported that the sinkhole was caused by a water main break in the area.
Source: Sinkhole swallows SUV in Rio Rancho, New Mexico