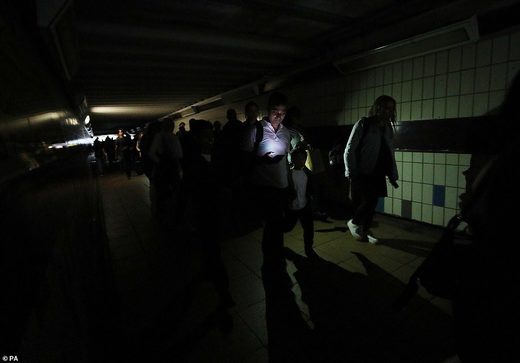 One of the worst power cuts to hit Britain in years caused transport chaos across the country last night and hit the energy supplies of almost a million people. Traffic lights stopped working, trains were cancelled, and stations were evacuated after a technical fault at two power generators run by National Grid triggered a ‘major incident’. On Friday evening, there were reports that the problems may have been caused by issues at a gas-fired power station – and at a wind farm off the coast of Yorkshire. ‘What happened is a major offshore wind generation site and a gas turbine failed at the same time,’ Devrim Celal, of Upside Energy in London, a contractor with National Grid, was reported saying. ‘There was a significant shortage of generation, and that sudden drop created ripple effects across the country.’
Source: Simultaneous wind farm and gas-fired power station failures blamed for Britain’s worst power cuts in years – Millions affected