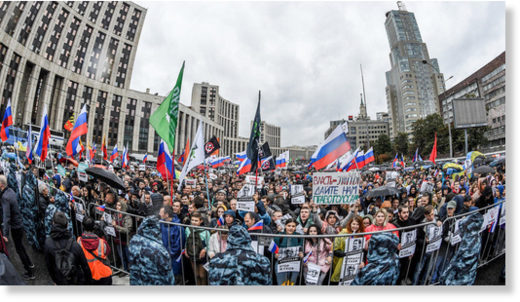 A Russian senator and a former riot police commander said officers acted unprofessionally and used “excessive force” against protesters at unsanctioned rallies in Moscow. Thousands of people have participated in several protests in Moscow in recent weeks, rallying against what they believe is the unfair treatment of several opposition candidates, which were barred from running in the upcoming city council election. Some of the demonstrations were unsanctioned and led to scuffles with police, and subsequent arrests. More than 1,000 people were detained at an unsanctioned protest on July 27. Senator Vyacheslav Markhayev called this development “scary.” A police veteran and a member of the Communist Party, he had led an anti-riot unit in the past in the eastern Buryatia region. He also served several tours in Chechnya during an armed conflict there. Markhayev did not mince his words in criticizing police, whose actions to disperse the rallies prompted allegations of police brutality….
Source: class=”bbc_link” target=”_blank” rel=”noopener noreferrer”>Senator criticizes Moscow police for using ‘excessive force’ to stop unsanctioned protests