February 7, 2019
Russia ‘Has Begun To Doubt Whether Maduro Can Cling To Power In Venezuela

Russia is losing its faith in Venezuelan President Nicolas Maduro’s ability to emerge victorious from the political crisis gripping the country, Kremlin sources say.
Moscow still publicly backs Maduro’s regime but ‘recognizes that the disastrous state of Venezuela’s economy is inexorably draining what remains of his public support’.
The unidentified sources also pointed out that the army, part of which is currently deployed to block an aid shipment of food and medicine from entering the country from Colombia, will be reluctant to continue crack downs on fellow Venezuelans.
‘Unfortunately, time isn’t on Maduro’s side,’ said Vladimir Dzhabarov, first deputy chairman of the international affairs committee in the upper house of Russia’s parliament, told the Moscow Times.
‘In a situation of worsening economic crisis, the mood in society can quickly turn against him.’
The staunch support for Maduro from Moscow hails partly from the fact that his regime is heavily indebted to the Russian government, and it is feared a collapse would not see it repaid.
Russia is said to have pumped more than £7.7billion ($10bn) into Venezuela through loans as well as investments.
Venezuelan state oil company PDVSA is paying back a $2.3bn (£1.8bn) Russian debt via oil supplies, which Rosneft said on Monday they expect them to be able to pay back as they see the current situation in Venezuela as ‘temporary’. 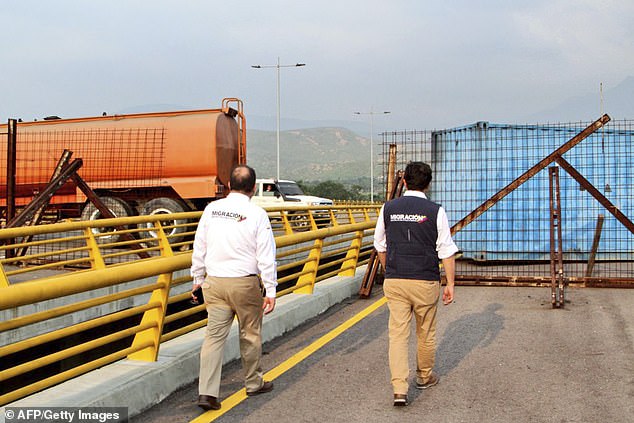 Two Colombian migration official walk on the Tienditas Bridge on the border between Cucuta, Colombia, and Urena, Venezuela, to inspect the blockage set up by the Venezuelan military ahead of a much needed humanitarian aid shipment 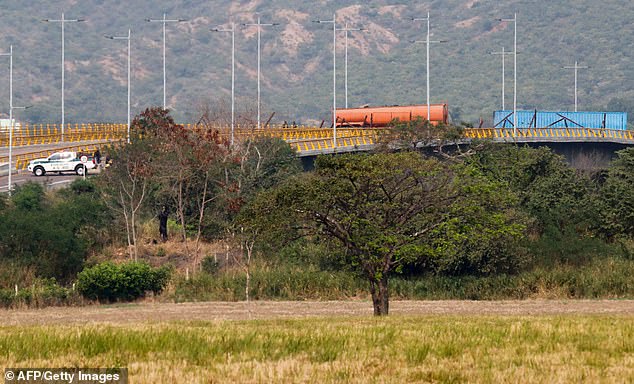 President Nicolas Maduro says he believes humanitarian aid is a forerunner of a US-led invasion and says he will therefore not let the shipment enter from Colombia
This comes as Venezuelan army continues its blockage of a bridge on the border with Colombia ahead of an anticipated humanitarian aid dispatch.
Maduro claims humanitarian aid is a forerunner of a US-led invasion, and defended his decision to order a barricade of the bridge by saying that ‘no one will enter, not one invading soldier.’
Opposition leader Juan Guaido, now recognised as interim president by the West and the US, claims that up to 300,000 people face death if the aid being blocked by Maduro’s army is not delivered.
The opposition-dominated National Assembly, led by presidential challenger Guaido, had warned the armed forces that blocking aid would mean crossing a ‘red line’.
‘You know there’s a red line, you know well there’s a limit, you know that medicines, food and medical supplies are that limit,’ lawmaker Miguel Pizarro said in a message to the military.
Venezuelan military officers used a tanker truck and huge shipping container to block access to the Tienditas bridge, which links Cucuta, Colombia to Urena, Venezuela.
Franklyn Duarte, an opposition lawmaker from the border state of Tachira, told AFP that troops from the armed forces were blocking the crossing.
The aid delivery was being coordinated by Guaido, who has declared himself interim president of the oil-rich country and now enjoys the backing of some 40 countries as Venezuela’s legitimate leader.
Maduro, 56, has repeatedly accused the United States of fomenting a coup.
His blockage of food, medicine and necessities to hundreds of thousands of starving Venezuelans came as weapons were discovered in cargo which the government claims was sent from Florida.
The weapons, including  19 rifles and high-calibre ammunition, were found at an airport in the city of Valencia, having been transported on an Airbus jet that flew in on Sunday, the Interior Ministry wrote on Twitter.
It is not known who the intended recipient of the weapons was.
The US, which has not ruled out a military intervention in crisis-wracked Venezuela, was the first to recognize him as acting president, followed by a dozen Latin American countries.
In his State of the Union address Tuesday night, President Donald Trump reaffirmed US support for Guaido, saying ‘we stand with the Venezuelan people in their noble quest for freedom.’

Source: Russia ‘Has Begun To Doubt Whether Maduro Can Cling To Power In Venezuela