Riots return to streets of Ecuador’s capital despite curfew, Moreno sends in the military

October 13, 2019
Riots return to streets of Ecuador’s capital despite curfew, Moreno sends in the military 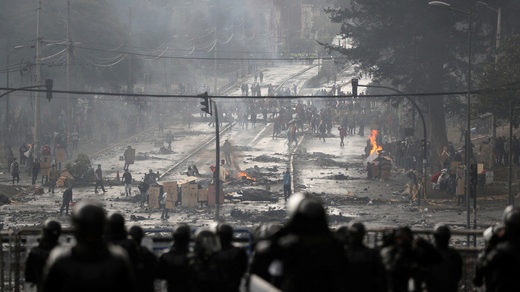 Anti-austerity protesters are burning fires and building barricades in the city of Quito, despite Ecuador’s President Lenin Moreno imposing and then delaying a curfew, while sending the military to deal with the unrest. Live footage from RT’s video agency Ruptly shows groups of protesters gather opposite police lines, many of them clutching improvised shields. Some even organized tortoise formations, using boards to try and deflect tear gas grenades and rubber bullets. Shots and explosions could be heard ringing in the air, as thick smoke clouded the scene. El Arbolito Park, which is not far from the National Assembly previously stormed by protesters, has become the epicenter of the protest, with people from different towns and villages streaming there to set up a protest camp.
Source: Riots return to streets of Ecuador’s capital despite curfew, Moreno sends in the military