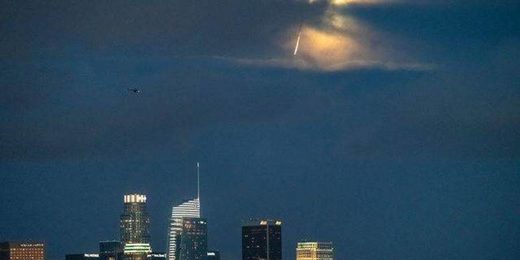 A streak of light in the skies over downtown Los Angeles Wednesday night that sparked the attention of onlookers wasn’t the opening to the next Hollywood disaster flick, but instead a stunt to celebrate the final supermoon of the year. The spectacle was reported around 7:30 p.m., with many taking to Twitter to share videos and photos of the sight. “What is this flying item on fire above downtown Los Angeles?” Dennis Hegstad wrote.
Source: Red Bull wingsuit stunt team’s ‘meteor’ sets Los Angeles skies ablaze