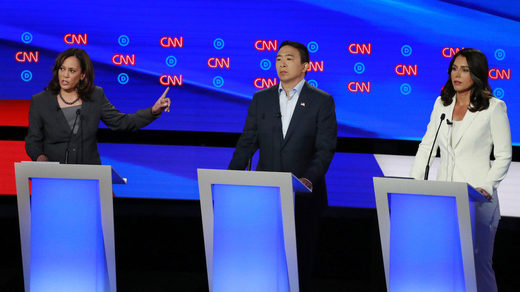 Why would the most talked-about candidate at the Democratic Party debate be almost entirely invisible on Twitter and attacked on cable networks afterward? Perhaps because the establishment protects its own. Congresswoman Tulsi Gabbard (D-Hawaii) was the most searched-for candidate in every single state after Wednesday night’s second Democratic debate, according to Google trends. Conservative news outlets Breitbart and the Drudge Report also declared her the victor, with 50 and 39 percent of the vote respectively. However, you wouldn’t know that if you had been watching CNN or MSNBC. While Gabbard is a foreign-policy focused candidate who has repeatedly stated her opposition to “regime change wars” abroad and her appetite for criminal justice reform at home, MSNBC couldn’t move past a meeting Gabbard had with Syrian President Bashar Assad in 2017, in a bid to bring a resolution to the county’s long conflict.
Source: Real threat to democracy: Media meddle in Democrat debate by siding with Harris, demonizing Gabbard