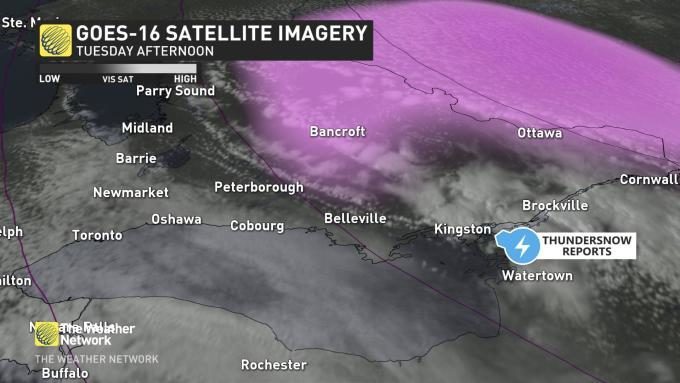 Thundersnow is a rare type of weather that typically occurs during the winter months. Reports of thundersnow in Kingston and surrounding regions add to the atypical spring weather that southern Ontario has seen this May. Snow, graupel and a few rumbles of thunder were reported at the Kingston International Airport shortly after 4:00 p.m. on May 12. The unique atmospheric setup created the right conditions for thundersnow to strike and this wintry precipitation to fall. The angle of the Sun caused air parcels to rise several kilometres up into the cold, unstable air aloft where temperatures were around -20°C. Temperatures near the ground were cold enough for the precipitation to fall as snow instead of rain. “The air aloft was so chilly that super-cooled water droplets accreted on the falling snowflakes before they reached the surface, distorting the classic snowflake,” says Weather Network meteorologist Tyler Hamilton.
Source: Rare thundersnow reported in southern Ontario