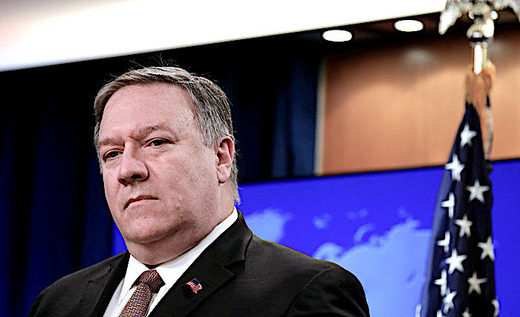 In an effort to threaten everyone into not investigating US or Israeli war crimes in the International Criminal Court, Secretary of State Mike Pompeo says anyone involved in such probes will lose their visa and may be sanctioned. The Washington war hawk said that action had to be taken because any investigation into alleged war crimes and torture committed by the United States would be a threat to US rule of law. Visas will be pulled or denied for anyone who has been involved in or even requested an ICC investigation of “any US personnel.” The ICC is currently mulling over a request to investigate possible war crimes committed by the US in Afghanistan in the course of the nearly 20-year conflict which has left over 100,000 Afghans dead. The international court prosecutor’s office says it has “reasonable basis” to believe that “war crimes and crimes against humanity” were, and continue to be, committed by foreign government forces in Afghanistan.
Source: Pompeo: ‘Change your course!’ as ICC war crimes probe threatens ‘US rule of law’