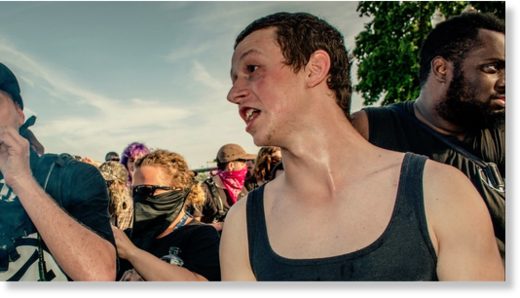 On Saturday morning, a Portland-area man was killed under mysterious circumstances. Twenty-three-year-old Sean Kealiher, who was known locally in the Antifa community under the pseudonym “Armeanio Lewis,” died of blunt-force trauma after being hit by a car, according to police. The vehicle that allegedly hit him had been shot at and was found crashed outside the building of the Democratic Party of Oregon. Local politicians, media and activists are praising Kealiher as a progressive hero. Full disclosure: I had numerous run-ins with Keahiler in my capacity as a journalist documenting antifa’s activities. So far, no one knows what really happened on early Saturday morning when Kealiher was killed. Portland Police have mostly kept mum about their early investigation, though they are pleading for witnesses to come forward. Antifa ideologues have a code of never allowing each other to cooperate with police. Police did confirm that the crime scene and car showed damage from gunfire….
Source: Notorious Portland antifa activist dies under mysterious circumstances