No To NATO: Time To End Aggressive Militarism

April 8, 2019
No To NATO: Time To End Aggressive Militarism

This week, the Foreign Ministers of the North Atlantic Treaty Organization (NATO) countries met in Washington, DC. NATO was greeted with bi-partisan support from Congress and by protesters who held actions and events from Saturday, March 30 through their meeting at the US Department of State on April 4.

US foreign policy is not the fabled “good cop” bringing peace to the world, but rather a policy of domination using military, economic and political power to accomplish aims for US transnational corporations and US empire. From the Iraq, Libyan, Syrian, Afghanistan and Yemeni wars (in particular) people understand the US uses its power in destructive ways that create chaos, suffering, refugees and death throughout the globe. But, few people understand the role of NATO.

The mythical NATO is an organization that keeps the peace in the world, but, in reality, it has always been an aggressive military force to protect western capitalism and provide cover for illegal interventions. When the US is unable to get the United Nations Security Council to approve military action, NATO provides a multi-national approach to wars as occurred in Serbia and Afghanistan among others. When Congress will not grant authority for US military action, as in Syria, NATO participation becomes the legal cover for massive military attacks by the United States.

While NATO provides a veneer of legality, in reality, it does not have any international legal authority to go to war any more than the United States has. Even NATO military attacks require either (1) UN authorization through the Security Council, or (2) a direct military attack and a self-defense response. The NATO wars are illegal under international law, just as unilateral wars by the United States are illegal.

Yves Engler writes that NATO was created not to stem Soviet aggression, which was the public justification, but to prevent the growing political left from succeeding in taking power after World War II. It was also an alliance to maintain unity among the historic colonial powers in the midst of former colonies gaining their independence from western domination.

At the time NATO was founded in 1949, there was little possibility of aggression by the Soviet Union after a war that killed 25 million Soviets. The Soviet Union and Russia were never a threat to the United States as historian Peter Kuznick explains. We discussed the history of NATO and its current role in global militarism with Engler on our podcast, Clearing the FOG, which airs on April 8, 2019.

This dynamic continues today. Since the fall of the Soviet Union and the end of the Warsaw Pact, NATO has become “imperialism’s global strike force,” according to Danny Haiphong. Any country that dares to assert its sovereignty and use its resources to meet its people’s needs becomes a NATO target.

Yet, there are liberal politicians who continue to fall for the lies about NATO. Earlier this year, the House of Representatives passed the NATO Support Act. All 208 Democrats who voted (26 didn’t), voted for it, including many progressives such as Pramila Jayapal, Alexandria Ocasio-Cortez, Rashida Tlaib, and Ilhan Omar.

NATO foreign ministers came to Washington, DC this week for a series of events culminating with a meeting in commemoration of its 70th-anniversary on April 4, which was also the anniversary of the assassination of Dr. Martin Luther King in 1968 and the anniversary of his “Beyond Vietnam” speech in 1967 where he connected the triple evils of racism, militarism and the extreme consumerism of capitalism. The primary focus of the week was how NATO can combat Russia.

The protests began on March 30 when hundreds of people met across from the White House to call for an end to NATO as well as opposition to the economic war and threats of military attack against Venezuela. People described the vicious NATO attack on Yugoslavia that included an aerial bombardment from March 24 to June 10, 1999, involving 1,000 aircraft flying 38,000 combat missions, despite the UN Security Council voting against the attack as did the US House of Representatives. The bombing included attacks on civilian infrastructure as well as military targets, destroyed the country, killed thousands and created a mass exodus of 850,000 refugees.

Protesters also described the expansion of NATO from 12 to 29 countries with a particular focus on nations bordering Russia. This occurred despite US promises to the Soviet Union that NATO would not seek to expand after they disintegrated. The collapse of the Warsaw Pact in 1989–1991 removed the de facto main adversary of NATO, which should have led to its dissolution but instead has led to its reorganization and expansion. Now, NATO seeks to expand to Georgia, Macedonia and Ukraine as well as spreading into Latin America with Colombia joining as a partner and Brazil considering participation (not coincidentally, these two nations border Venezuela).

On Wednesday, when seven NATO foreign ministers, a US senator and a member of Congress, among others spoke at the Center for European Policy Analysis’ “NATO at 70” conference, they were confronted by multiple protesters who were able to get into the highly-restricted conference. Dozens more demonstrated outside. Protesters described NATO as a war-making alliance that should be abolished.

During the week, NATO Secretary General Jens Stoltenberg had a friendly meeting with President Donald Trump where they talked about expanding NATO and having NATO members spend more money on militarism.  When Stoltenberg spoke before a joint session of Congress, he was given repeated bi-partisan standing ovations. In his speech, he called for more funding and applauded Trump’s efforts to increase funding for NATO.

The next day when NATO foreign ministers met at the State Department, hundreds of protesters were outside showing opposition to NATO. A coalition of peace groups came together for this protest and events throughout the week calling for disbanding NATO. Breaking from the bi-partisan support for NATO, Howie Hawkins, who announced an exploratory committee for Green Party presidential nomination, joined the protests calling for an end to NATO and dramatic cuts to the military budget.

Following the State Department protest, activists marched through DC to the memorial of Rev. Dr. Martin Luther King on the anniversary of him being killed by the government in 1968. People talked about King’s legacy as an opponent of war being denigrated by the NATO meetings. They also echoed King’s call for a ‘Revolution of Values’ that puts the necessities of the people and the planet before the profits of big business interests that are protected by NATO. 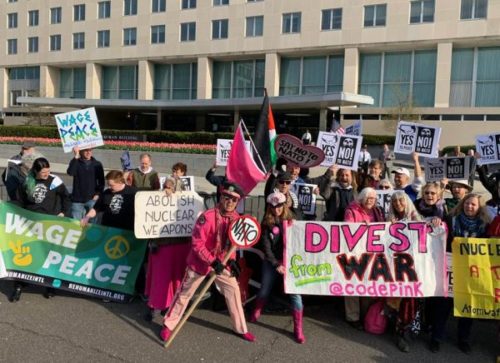 Outside the State Dept (Photo by CODEPINK)

Ending NATO and Moving Beyond Militarism

Our task of educating the public about the real purpose of NATO was highlighted by a conversation we had with a Park Police officer at the King Memorial. We were protesting without a permit and he was telling us we had to leave. We explained that King protested without permits and we were echoing King’s message of nonviolence and an end to war. The officer responded, “you are stretching King’s message by protesting NATO.”

His comment crystallized our task. People do not realize what NATO really is. Our first task is to educate the public about the real role of NATO as a military alliance that has waged war around the world. This includes Afghanistan, Yugoslavia, Libya, and Syria among others. Once the public understands the true role of NATO, we must make our demands clear — end NATO.

The world needs to move beyond militarism to mature and legal forms of dispute resolution by creating courts that prosecute war crimes and the crimes against humanity of all countries, including members of the UN Security Council, and putting in place agreements that end the threat of nuclear war, the most destructive form of war.

Source: No To NATO: Time To End Aggressive Militarism