August 8, 2019
NBC ignoramus says Trump’s order to fly flags at half-staff after shootings could be nod to Hitler 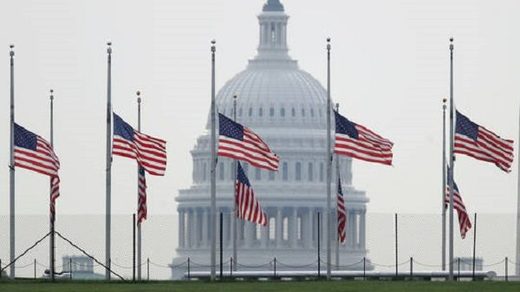 Donald Trump has ordered American flags to be flown at half-staff until August 8 in memory of the victims of last week’s shootings — but one NBC contributor thinks the date could be seen as a secret nod to neo-Nazis. Trump issued a proclamation to lower flags to half-staff at the White House and other government and military buildings on Sunday to mourn the victims of shootings in El Paso, Texas and Dayton, Ohio. The flags will return to full-staff on Thursday, August 8 — but former FBI assistant director for counterintelligence turned-NBC pundit Frank Figliuzzi has seen a possible conspiracy in the date. Figliuzzi explained that the number 88 is “very significant in the neo-Nazi and white supremacist movement” due to the fact that ‘H’ is the eighth letter of the alphabet and “the numbers 88 together stand for Heil Hitler.”
Source: NBC ignoramus says Trump’s order to fly flags at half-staff after shootings could be nod to Hitler