Native people across the Pacific are resisting dispossession of sacred land

August 12, 2019
Native people across the Pacific are resisting dispossession of sacred land 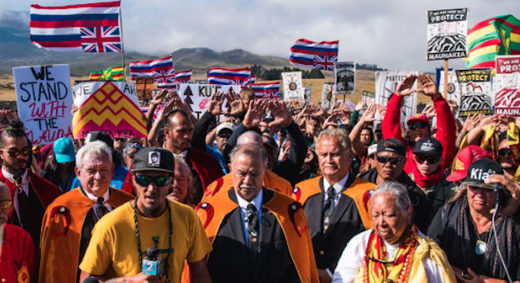 On the rugged slopes of Mauna Kea, Hawai’i’s highest volcano, a major standoff erupted in mid-July after Hawai’i’s Supreme Court ruled that construction of an 18-story high telescope known as “TMT” (named for the telescope’s 30-meter diameter mirror) could begin. The nearly 14,000-foot high volcano is already home to 13 large telescopes dating back to the 1960s with a history of opposition. TMT opponents say the $1.4 billion TMT must not be the 14th. When hundreds of Native Hawaiians gathered to block construction vehicles, Gov. David Ige showed initial restraint, but by the third day, police and Hawai’i’s National Guard were dispatched, key roads closed, a state of emergency declared, and at least 34 kūpuna (elders), were arrested in an emotional exchange with Department of Land and Natural Resources officers.
Source: Native people across the Pacific are resisting dispossession of sacred land