Moscow: Countries that stood up for INF Treaty have now ‘de facto blessed’ US for scrapping it

December 24, 2018
Moscow: Countries that stood up for INF Treaty have now ‘de facto blessed’ US for scrapping it 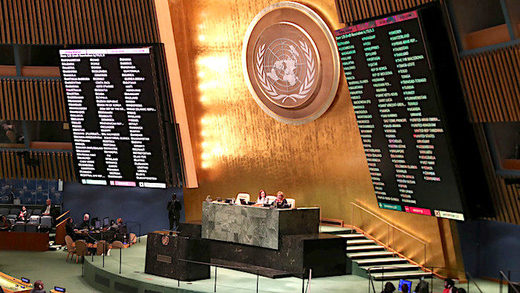 The very same nations that blasted the White House for deciding to pull out of the landmark 1987 INF Treaty have now helped to defeat the UN resolution calling for its support, the Russian Foreign Ministry pointed out. Russia expressed “disappointment” as a resolution in support of the Intermediate-Range Nuclear Forces Treaty was voted down by a narrow margin in the UN General Assembly on Friday. Forty-three states, including China and South American countries, voted for the document drafted by Russia. Forty-six voted against the resolution, with 78 abstaining. The US’ allies in NATO and the EU voted ‘No’ despite previously speaking in favor of keeping the arms agreement intact, the Russian Foreign Ministry noted. “These countries, especially the NATO members – contrary to their own statements about the importance of the INF Treaty – acted as its opponents.”
Source: Moscow: Countries that stood up for INF Treaty have now ‘de facto blessed’ US for scrapping it