Mexico reveals it deployed 15,000 soldiers and National Guardsmen to its US border :: Daily Mail Onl

June 25, 2019
Mexico revealed on Monday it had deployed some 15,000 troops to its northern border with the U.S. to stop the flow of migrants crossing into America.

The army chief said that soldiers and National Guardsmen are detaining migrants who attempt to illegally enter the U.S. 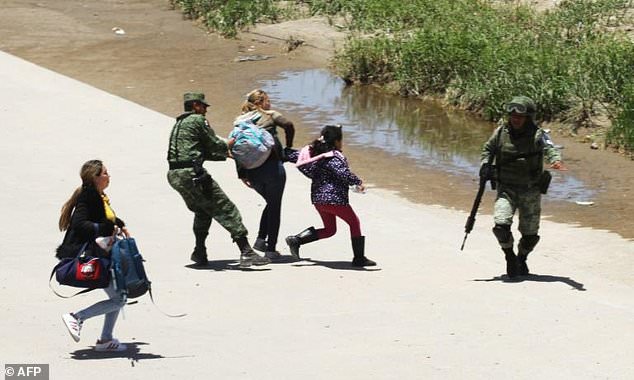 Mexico was pushed by Trump to slow the flow of Central Americans when representatives from both countries met in Washington earlier this month.

The Mexican government promised to reinforce its southern border with Guatemala by dispatching 6,000 members of the newly-created National Guard, but had not previously disclosed the extent of the crackdown on its northern border.

‘We have a total deployment, between the National Guard and army units, of 14,000, almost 15,000 men in the north of the country,’ Defense Minister Luis Cresencio Sandoval said at a press conference alongside President Andres Manuel Lopez Obrador.

Sandoval affirmed that those forces were detaining migrants to prevent them from crossing before placing them under custody of the National Migration Institute.
more:
https://www.dailymail.co.uk/news/article-7176361/Mexico-cracks-US-border-15-000-troops.html