Is the latest spate of tornadoes in Kansas and Missouri the new normal?

May 27, 2019
Is the latest spate of tornadoes in Kansas and Missouri the new normal? 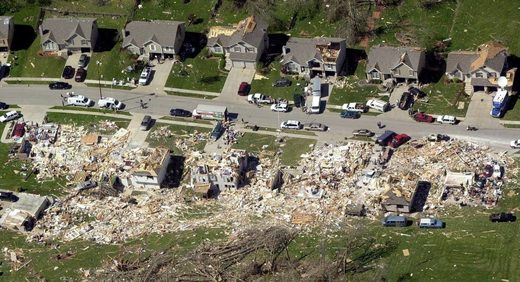 Perched in front of his laptop in his Wichita home, meteorologist Mike Smith watched on his screen Wednesday as one tornado after another, five in a single day, touched down with devastating force. The first was in Kansas, followed by another that cut through tiny Golden City, Missouri, killing three people. Then, as the clock ticked toward midnight, a twister with EF-3 winds in excess of 135 miles per hour cut a path through Jefferson City, the state’s capital, heaving bricks and turning homes into dollhouses ripped open to the sky. A thought went through Smith’s head. “Here we go again. … It’s just part of the natural cycles of weather.” Indeed, Smith is right. Missouri and Kansas this past week were stuck in a cycle of severe weather that rolls around roughly every 15 to 20 years. The last time the region had so many back-to-back tornadoes was in May 2003. Nothing new there, Dorothy.
Source: Is the latest spate of tornadoes in Kansas and Missouri the new normal?