Iran vs U.S.: How Iran Can Strike U.S. Targets In The Middle East

How Iran can strike US targets in the Middle East: Missiles, sea mines, drones and jihadist militias

Iran could deploy missiles, sea mines, drones and thousands of battle-hardened jihadist militias across the Middle East if Tehran’s increased tensions with Washington descend into war.
Iranian sea mines pose a constant threat in the Gulf, while their missiles are capable of striking US warships and raining down chaos in Saudi Arabia, Israel and the Gulf monarchies.
Across the blood-soaked deserts they have battle-hardened jihadists ready for war with American troops in Iraq, Syria and Afghanistan.
Last week, unidentified assailants struck Saudi oil assets and on Sunday others fired a rocket into Baghdad´s heavily fortified ‘Green Zone’ that exploded near the U.S. embassy. Iran denied any role in either incident. 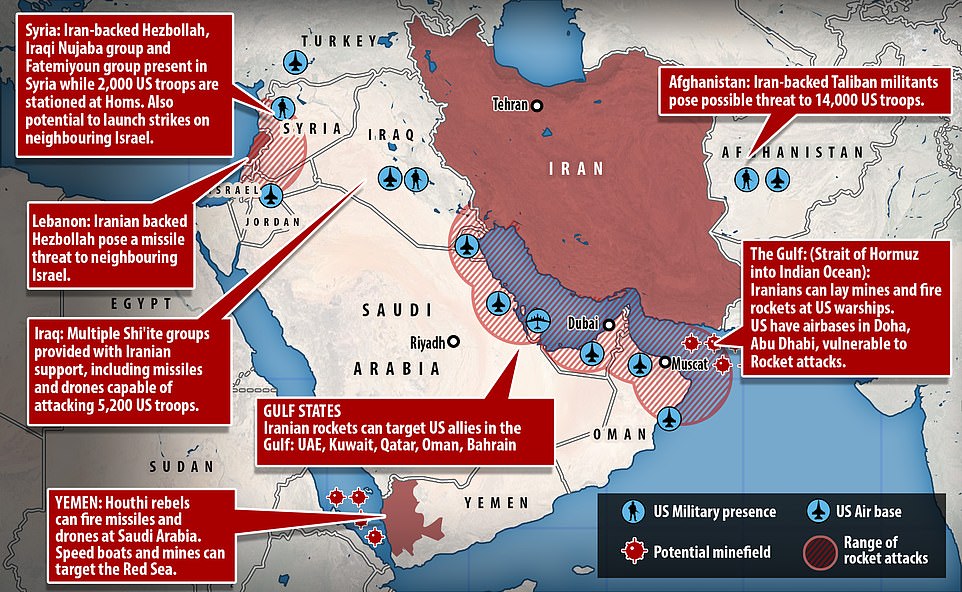 Iran’s influence with jihadist militias stretches across the Middle East and their domestic weapons capabilities pose a constant threat to US allies in the Persian Gulf
Meanwhile Iranian general Qassem Suleimani called for their allies in Iraq to ‘prepare for proxy war,’ and President Donald Trump has hit back.
He warned this week Tehran should expect ‘great force’ if it attacked U.S. interests in the Middle East. At the weekend he tweeted: ‘If Iran wants to fight, that will be the official end of Iran.’
The Iranian government has condemned Trump’s remarks and U.S. deployments as provocative and called for respect and an end to a U.S. squeeze on Iran’s oil exports aimed at forcing it to negotiate.
Here is an outline of ways in which Iran could wage war on the United States, and its regional allies and interests, if their dispute escalated.
THE GULF
Revolutionary Guards commanders have long warned that in a war they could cut off Gulf oil supplies flowing through the Strait of Hormuz into the Indian Ocean.
Iran holds one side of the strait, putting shipping in range of its forces from the sea or shore, and allowing it to lay mines.
Iran could also strike directly at U.S. forces in the Gulf with missiles.
The U.S. Combined Air Operations Center is based at al-Udaid airbase in Qatar. Its navy Fifth Fleet is based in Bahrain. The U.S. air force also uses al-Dhafra airbase in Abu Dhabi and Ali Al Salem airbase in Kuwait.
The governments of Bahrain and Saudi Arabia say Iran planned attacks on security forces in Bahrain in recent years. Iran and Bahrainis accused of this have denied it.
Missiles could target infrastructure in Gulf monarchies, including water and power plants, oil refineries and export terminals, and petrochemical factories.
A 2012 cyber attack targeting Saudi oil giant Aramco and another two years earlier against Iran’s nuclear programme point to new ways a conflict could play out.
IRAQ
Iran-backed Shi’ite groups gained strength in the chaos after the 2003 U.S.-led invasion, and were incorporated last year into the security forces, underscoring their pervasive role despite the American presence.
The strongest groups – trained, equipped and funded by Tehran – are Asaib Ahl al-Haq, Kataib Hezbollah, Harakat Hezbollah al-Nujaba and the Badr Organisation.
The United States says Iran was behind the deaths of at least 603 American armed service members since 2003.
Some 5,200 U.S. troops remain in Iraq, located in four main bases, as well as Baghdad airport and the coalition headquarters in the Green Zone. Washington last week ordered a partial evacuation of its embassy.
The militias have positions very near places where U.S. forces are stationed, and have powerful rocket and drone capabilities.
YEMEN
Yemen’s Houthis chant ‘Death to America, Death to Israel’, daubing the slogan on walls and gluing it to their weapons. The U.S. has backed a Saudi-led coalition targeting the group since 2015.
Iran and the Houthis have longstanding links, but both deny coalition claims that Tehran provides training and weapons. The U.N. says missiles fired at Saudi Arabia share design features with ones made in Iran.
Since the war began, the Houthis have often used rockets and drones to attack Saudi Arabia, one of Washington’s closest regional allies. One came down near Riyadh airport in 2017.
U.N. experts say the Houthis now have drones capable of dropping bigger bombs at further range and with more precision than before. Last week, drones hit two oil pumping stations hundreds of kilometres inside Saudi territory.
Houthi control over Yemen’s old navy, with speed boats and sea mines, means the group could try to disrupt shipping in the Red Sea.
SYRIA
While backing President Bashar al-Assad during eight years of conflict, Iran has built a network of militias in government-held areas.
These include Lebanon’s Hezbollah, the Iraqi Nujaba group, and the mostly Afghan Fatemiyoun group.
They have fought near the Syrian-Iraqi border, near the U.S. military base at Tanf, and near the Israeli-controlled Golan Heights.
A senior U.S. official said in February that Washington would keep about 400 troops in Syria after defeating Islamic State, down from about 2,000 before.
They are located in the northeast area held by Kurdish-led forces and at Tanf, near the borders with Jordan and Iraq.
Israel has struck Iran and its allies in Syria, seeking to drive them far from its frontier. In January it accused Iranian forces of firing a missile at a ski resort in the Golan Heights.
LEBANON
The U.S. blames Hezbollah for its military’s bloodiest day since the Vietnam war: the truck bombing at a marine barracks in Lebanon in 1983 that killed 241 U.S. service members. It also accuses it of taking Americans hostage in Lebanon in the 1980s.
The group, set up by Iran to resist Israel’s occupation of south Lebanon, is today the most powerful in the country.
Today, Hezbollah says it has a large arsenal of ‘precision’ rockets that could strike all over Israel, including its atomic reactor. It has threatened, in the event of war, to infiltrate fighters across the frontier.
A pro-Hezbollah journalist, Ibrahim al-Amin, last week wrote in Lebanon’s al-Akhbar newspaper that if Israel got involved in any war between the U.S. and Iran, striking at Tehran’s proxies, it would ‘become an actual target for allies of Iran’.

Source: Iran vs U.S.: How Iran Can Strike U.S. Targets In The Middle East