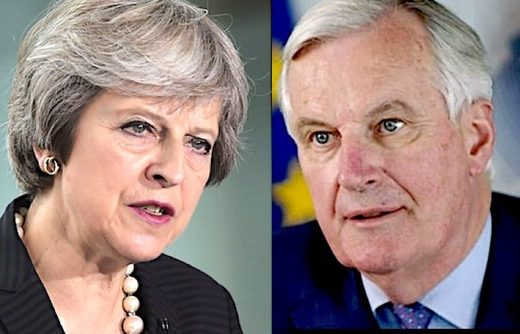 Theresa May and her ministers “never” used the threat of a no-deal Brexit in talks with the EU, according to chief negotiator Michel Barnier – despite the outgoing PM insisting the UK must keep the option ‘on the table.’ In an interview with BBC Panorama, to be aired on Thursday night at 9pm BST, Barnier revealed that May and her Brexit negotiating team did not use ‘no-deal’ as a bargaining chip, claiming that UK officials always knew such a threat would not impress Brussels. “I think that the UK side, which is well informed and competent and knows the way we work on the EU side, knew from the very beginning that we’ve never been impressed by such a threat. It’s not useful to use it.” It’s an admission that could anger many Brexiteers, who could see this as proof that Britain was never really serious about using it as a threat to get the best deal for the country.
Source: Idle threat? Barnier claims Theresa May never used no-deal Brexit as a bargaining chip