Elad Benari,
The IDF on Sunday evening attacked terrorist targets belonging to the Islamic Jihad terrorist organization in Damascus, the IDF Spokesperson’s Unit confirmed.
Dozens of Islamic Jihad terror targets across the Gaza Strip were attacked as well.
According to the statement, the air strikes targeted a site belonging to Islamic Jihad on the outskirts of Damascus, which is a significant anchor of the Islamic Jihad’s operations in Syria. At the site, the organization conducts research and development of weapons, adapting them to production in the Gaza Strip and to local production in Syria.
In addition, tens of pounds of AP, a material used as a rocket fuel, are manufactured at this site, and technical training courses for terrorists are held there, both from the Gaza Strip and from the northern arena.
The IDF statement also provided details on dozens of Islamic Jihad terrorist targets that were attacked an hour earlier in Gaza.
In Rafah, underground infrastructures and sites used to store raw materials used for rocket production were attacked.
In addition, the Khan Yunis headquarters of Islamic Jihad was attacked, which contains a compound for training for the firing of anti-tank missiles as well as military equipment used by the terrorist organization’s naval force.
The attacks were carried out in retaliation for Sunday’s rocket barrage on southern Israe.
Earlier on Sunday evening, media outlets in Syria reported of explosions being heard over Damascus.
Syria’s official news agency reported that the country’s air defense systems operated against what was described as “hostile targets”.
IDF strikes Islamic Jihad in Syria and Gaza in response to rocket fire
JUDAH ARI GROSS
In a highly irregular move, the Israel Defense Forces launched a series of retaliatory airstrikes on Palestinian Islamic Jihad sites in both Syria and the Gaza Strip on Sunday night in response to waves of rocket attacks by the Iran-backed terror group throughout the evening, the military said.
“IDF fighter jets struck terror sites belonging to the PIJ terror group south of Damascus in Syria, as well as dozens of PIJ sites throughout the Gaza Strip,” the IDF said in a statement.
Israel rarely acknowledges conducting airstrikes in Syria, save for those that are in retaliation to attacks coming from there.
Rocket attacks against southern Israel continued throughout the IDF’s counter-attack, triggering several rounds of sirens in the town of Sderot and the surrounding area.
Throughout Sunday evening, some 30 rockets and mortar shells were fired at southern Israel from the Gaza Strip, approximately half of which were intercepted by the Iron Dome missile defense system. 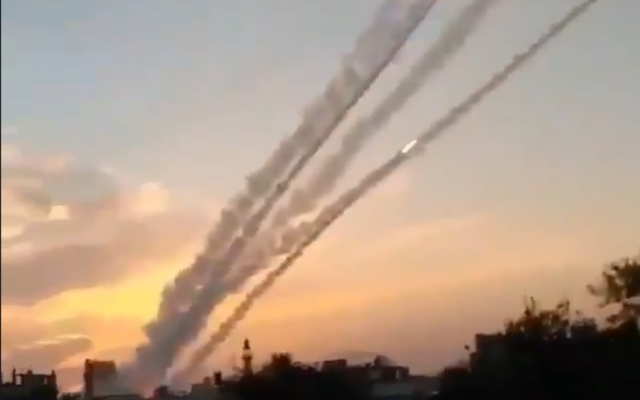 Rockets are fired from the Gaza Strip at southern Israel on February 23, 2020. (Screen capture)
The IDF said the strikes in Syria and Gaza were in response to both the morning’s attempted IED attack and the rocket fire throughout the evening.
“The IDF will respond aggressively to the terrorist activities of the Islamic Jihad, which endanger the citizens of Israel and harm its sovereignty,” the military said.
The IDF said its fighter jets targeted the main base of the Iran-backed terror group in Syria, which it said was used to develop new weapons and to manufacture “tens of kilograms of [ammonium perchlorate]” rocket fuel each month.
The military said the site, in the Damascus suburb of al-Adleyeh, was also used for training exercises for members of the organization “both from the Strip and on the northern front,” referring to Lebanon and Syria.
Syrian state media outlet SANA reported that the incoming Israeli attacks triggered the country’s air defenses, which it said intercepted many of the incoming missiles, an oft-heard Syrian claim that most defense analysts dismiss as a false boast.