‘He went for it’: Staffer who accused of Cuomo of groping her at the Executive Mansion in November breaks her silence to tell how he ‘gave her an overtly sexual hug before sticking his hand under her blouse and grabbing her breast’

April 8, 2021
‘He went for it’: Staffer who accused of Cuomo of groping her at the Executive Mansion in November breaks her silence to tell how he ‘gave her an overtly sexual hug before sticking his hand under her blouse and grabbing her breast’

An aide who accused Gov Andrew Cuomo of groping her at the Executive Mansion late last year has revealed gut-wrenching new details about how he allegedly closed her in a room with him and pulled her in for a hug before reaching under her blouse while ignoring her protests.

The woman shared her story publicly for the first time in an article published by the Times Union of Albany on Wednesday.

She spoke on the condition of anonymity to protect her privacy because she still works at the state Capitol, although her identity is known within the governor’s circle, the newspaper reported.

The interview offers alarming new details about the most serious of multiple sexual harassment and misconduct allegations against Cuomo, which are currently being investigated by the New York Attorney General’s office.

The governor has repeatedly denied any allegations of sexual harassment, and insisted that he ‘never touched anyone inappropriately.’

His office did not return DailyMail.com’s requests for comment on Wednesday.

However the accuser who spoke to the Times Union this week said that Cuomo touched her inappropriately on multiple occasions after ‘grooming’ her for roughly two years.

Things escalated about a year ago, she said, recalling one conversation in which Cuomo allegedly told her: ‘Oh, if you were single, the things that I would do to you.’ 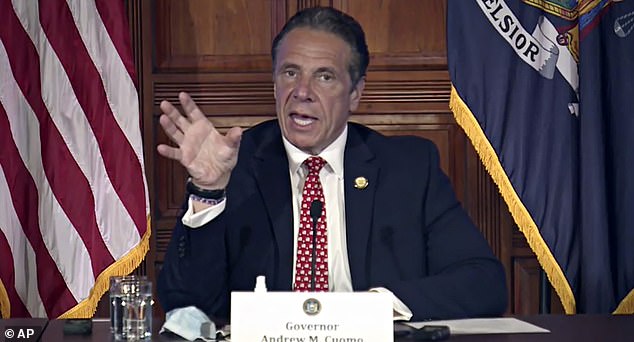 A staffer who works for New York Governor Andrew Cuomo alleges that he groped her after she resisted his advances. Cuomo is seen above speaking to reporters in Albany on Wednesday

The woman recounted how she was summoned to the Executive Mansion in Albany in late November after Cuomo allegedly asked one of his top assistants, Stephanie Benton, to send her, specifically, to help with a technical issue on his phone.

When she reached his office on the second floor she said Cuomo walked over from his desk and embraced her in ‘a sexually aggressive manner’, according to the Times Union.

She said she told Cuomo: ‘Oh, the door is right there,’ because ‘I was mortified that a woman who works here is going to come in and see.

‘I said to him: “You’re going to get us in trouble.” I didn’t know what else to say,’ she recalled. ‘It was pretty much like “What are you doing?”

The woman said Cuomo closed the door ‘so hard’ that she thought staff elsewhere in the house would hear and ask: ‘Is everything okay up there?’

‘He came right back and he pulled me close and all I remember is seeing his hand, his big hand. I remember looking down like, “Holy s**t.”‘

That’s when she said Cuomo reached his hand under her blouse and grabbed her breast over her bra.

‘I was just so confused and so taken aback by it … He never said anything, which was odd,’ she said.

‘I don’t remember actually saying the word “Stop.” I think I said, “You’re crazy”,’ she told the newspaper.

‘I do remember saying that, and that’s when he ultimately stopped… Me saying “You’re crazy” – that was definitely not something that he wants to hear.

‘It definitely was a hit to his ego…And then it was almost like instantly he was done.

‘He turned around and walked back to his desk. He didn’t say anything. I walked myself out to the front door and nothing was said… It was almost like I felt like a piece of garbage to him. I felt degraded.’

As she sat in her car outside the mansion she remembered thinking to herself: ‘Okay, I have to now go back into the Capitol, go back to my desk and do my job and pretend that, like, that didn’t just happen.’ 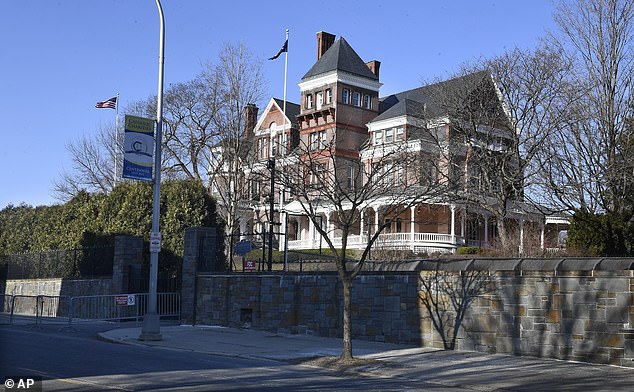 The alleged incident took place in November at the governor’s Executive Mansion in Albany. Cuomo allegedly summoned the staffer to his second-floor office because he claimed he needed help with his iPhone

The woman said Cuomo brought up the interaction a month later when she was taking dictation for him at his Capitol office.

‘Near the end of it, he looked up at me and he said: “You know, by the way, you know people talk in the office and you can never tell anyone about anything we talk about or, you know, anything, right?”‘ she said.

The woman alleged that Cuomo’s grooming and pattern of inappropriate behavior began with little hugs and cheek kisses about a year after she joined his office as an executive assistant in late 2017.

‘It was never in front of anybody. He made sure that it was either at the mansion or, if it was at the Capitol, that no one was around,’ she said.

‘I remember thinking one time Stephanie was around, or [Secretary to the Governor Melissa DeRosa] was around, and I had been so used to him getting up and hugging me that when he didn’t I said: “Hmm.’ It felt calculated – he would totally act different.’

‘Sometimes he would pull my whole body close to him,’ she said. ‘I remember purposely, like, taking my pelvis and pulling away. … I knew what he was doing.’

She described one interaction on New Year’s Eve in 2019 when she was sent to the Executive Manson to help Cuomo with his State of the State address.

They were alone in his office when he asked her to take a selfie with him, and she said reluctantly said yes.

‘I remember standing up in his upstairs office. I was holding up the phone. I was nervous. As the phone is up I feel him, like, not just sliding his hands, he’s like rubbing my butt cheek, but not saying anything. That was the first blatant move,’ she said.

She remembered her hand trembling to the point that she couldn’t get a clear photo.

‘I remember him doing it for more than a second. I said: “I can’t take a good picture, governor.” He said: “Why don’t we just sit down on the couch and try to take a better one?”

She said Cuomo asked her to send the photo to another female colleague but warned her not to show it to anyone else.

‘He’s kind of letting you know it would be in your best interest not to, if you know what’s good for you.

The woman said she saw less of Cuomo after the coronavirus pandemic forced the majority of his staff to work from home in March 2020.

‘If it wasn’t for this pandemic and me being quarantined and being home, I’m sure that the groping probably would have happened sooner,’ she said. ‘I didn’t see him for a long time.’

Their began to see each other more regularly in the fall – before the day of the alleged groping incident in November.

The woman stayed silent about what had happened until early March, when Cuomo addressed the media about allegations from two other former staffers.

‘I now understand that I acted in a way that made people feel uncomfortable,’ the governor said at a press conference.

‘It was unintentional and I truly and deeply apologize for it. I feel awful about it and, frankly, I’m embarrassed by it – and that’s not easy to say, but that’s the truth.’

‘But this is what I want you to know, and I want you to know this from me directly: I never touched anyone inappropriately. I never knew at the time that I was making anyone feel uncomfortable. I certainly never, ever meant to offend anyone or hurt anyone or cause anyone any pain. That is the last thing I would ever want to do.’

The woman was in a room watching the press conference with other staffers when a colleague noticed she was on the verge of tears.

The woman ended up telling her story to the colleague, who reported the allegations to a supervisor.

On March 9 the Times Union published it’s first article about the woman’s allegations, citing a source with knowledge of her claims.

Cuomo responded to that report by saying: ‘I have never done anything like this. The details of this report are gut-wrenching.’

In the weeks since the first allegations came to light the governor has brushed off widespread calls for his resignation and asked that people wait for the results of an investigation overseen by state Attorney General Letitia James.

The state Assembly is conducting a separate investigation into whether there are grounds to impeach the governor.

Cuomo has been accused of sexual misconduct by at least nine women – most of whom are current or former staffers.

The unnamed staffer is the second woman to accuse the governor of using his cell phone illiteracy as a pretext for inviting them to his private quarters before allegedly engaging in misconduct.

An attorney for Charlotte Bennett, a former Cuomo aide who worked as an executive assistant and health policy adviser in his administration, alleges that the governor summoned her to his private residence on June 5 of last year.

Bennett’s lawyer claims that Cuomo called her because he said he ‘was uncertain how to get from his “settings” app to his “notes” app’ on his iPhone, according to the Times Union.

Source: ‘He went for it’: Staffer who accused of Cuomo of groping her at the Executive Mansion in November breaks her silence to tell how he ‘gave her an overtly sexual hug before sticking his hand under her blouse and grabbing her breast’