May 15, 2019
Giant sinkhole appears near farm house in Russia 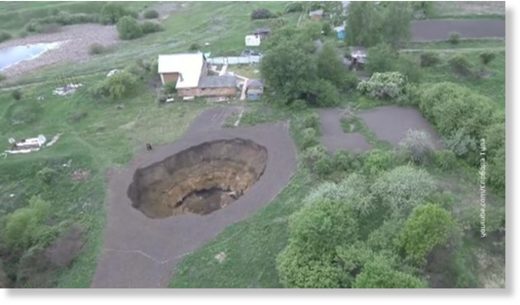 A giant sinkhole appeared in the village of Dedilovo of the Tula Region of Russia on the 8th of May. The huge hole in the ground the size of an ice hockey rink, in which one could put a five-storey building, appeared on the site where a tractor was working on the soil the day before. The edge of the sinkhole was just 40 meters from a house. The household belongs to a resident of Tula, who bought this land just a short while ago. There is every chance for the sinkhole to grow larger. The sinkhole may swallow up the house as well. Most likely, the phenomenon occurred as a result of the washout of limestone rock. Local authorities haven’t shown any reaction to the phenomenon. They only closed off the dangerous site around the hole.
Source: Giant sinkhole appears near farm house in Russia