And dozens of people are gathered in a field outside a food distribution point, hoping today might be the day they get something to eat.“If you’re hungry, it’s easy to get sick from stress and everything,” says Mduduzi Khumalo, who’s been lining up every day for two weeks. To get food your name has to be on the list and, so far, despite registering multiple times, his hasn’t been.

Khumalo worked as a delivery man before South Africa’s lockdown decimated his income. His children used to get two meals a day at school, but schools are closed now. Every day, the kids wait for him at the family’s tiny home, and every day brings the same bad news.
“They know that if I don’t get anything for them, it’s over,” explains Khumalo.
The pandemic has left the world facing an unprecedented hunger crisis. The United Nations World Food Program (WFP) has warned that by the end of the year, more than 260 million people will face starvation – double last year’s figures.
“In a worst-case scenario, we could be looking at famine in about three dozen countries,” warned WFP director David Beasley. He said the world could face multiple famines “of biblical proportions within a few short months.“
Oil prices have collapsed, tourism is drying up, and overseas remittances – foreign workers transferring money to their families in other countries – on which many people depend for survival, are expected to decline sharply.
There’s “a real danger that more people could potentially die from the economic impact of the pandemic than from the virus itself,” Beasley said.

If global GDP declines by 5% because of the pandemic, another 147 million people could be plunged into extreme poverty, according to estimates by the Washington-based International Food Policy Research Institute.
More than half of those people – 79 million – live in sub-Saharan Africa, David Laborde Debucquet, a senior research fellow at IFPRI, told the Thomson Reuters Foundation. Another 42 million are in South Asia, he said.
“We are talking about (people) earning below $1.90 a day… where basically your life is in danger because, when you have this type of poverty and you cannot eat, you will die,” Debucquet told the Thomson Reuters Foundation. “This will affect the urban poor much more. In the last couple of decades, we have seen very fast urbanization in these two regions.“
Thandi Lebho, 39, lives in the South African township of Diepsloot. She and her husband and three children have been waiting for food donations for three weeks. They haven’t been able to get what they need since South Africa’s lockdown began and her income from selling tupperware containers dried up.
“I’ve registered online and by phone, and I write on the papers from the street, and I came here at the clinic and registered, but nothing happened,” she tells CBS News. When she manages to get to the food distribution truck, it’s already run out of supplies.
“The kids are not going to school and education is going low. We are struggling to get money because I’m working for myself. I’m self-employed – so my business is in my house – so I’m not earning anything now,” she says. “I’m starving now. I don’t have anything.”
She’ll be back in the food line tomorrow, trying to get something to keep her family going. 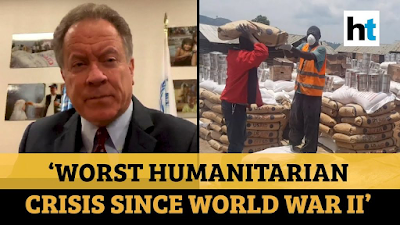