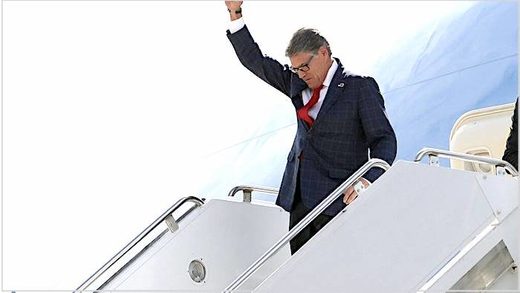 Energy Secretary Rick Perry notified President Trump on Thursday that he intends to leave his job soon, two administration sources familiar with the matter said. Perry was traveling with the president to Texas when he shared the news aboard Air Force One. Speaking to reporters later Thursday, Trump called Perry “outstanding” and announced, “We already have his replacement.” But, Trump said Perry would stay on until the end of the year. “It’s his time. Two years is a long time,” Trump said. “We have the man … we’re going to be putting in Rick’s place.” Fox News is told Perry had planned to resign at the end of the year. However, the former Texas governor had come under scrutiny over the role he played in the president’s dealings with Ukraine, which are currently the subject of an impeachment inquiry — raising questions as to whether the probe factored into his announcement Thursday. House Democrats subpoenaed Perry earlier in the day as part of their investigation.
Source: Energy Sec. Rick Perry announces plans to resign; House Dems subpoena him regarding Ukraine