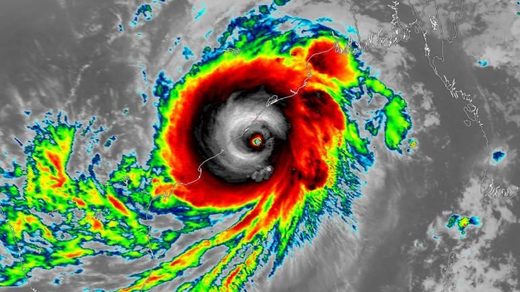 Cyclone Fani, one of the biggest storms to come off the Indian Ocean in recent years, slammed into India on Friday, tearing down trees, blowing away food stands and cutting off power and water. The monster weather system, which threatened to bring a dangerous storm surge that could flood low-lying areas, was packing winds of up to 180 kilometres (110 miles) an hour as it ripped into the country’s east coast. Forecasters say the areas could see gusts of up to 200 kilometres per hour, equivalent in strength to a Category 3 to 4 hurricane. In recent days authorities in Odisha, where 10,000 people died in a 1999 cyclone, have evacuated more than a million people as they fret about a possible 1.5-metre (five-foot) storm surge. Hundreds of thousands more people in West Bengal state have also been given orders to flee. Special teams were moving through holiday villages urging tourists to get to safety.
Source: Cyclone Fani makes landfall in India threatening huge destruction