China, India not best friends but agree strategic adjustment may prevent war between the superpowers

October 13, 2019
China, India not best friends but agree strategic adjustment may prevent war between the superpowers 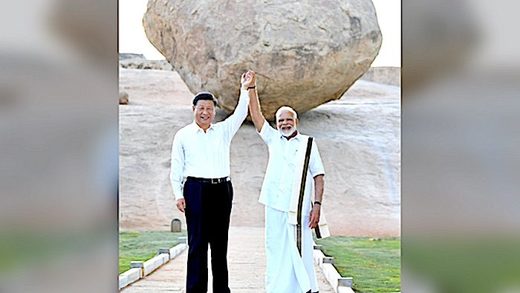 Asia’s No.1 and No.2 powers have longstanding conflicts of interest, but are seeking common ground through “strategic communication” between their leaders. The goal – stability – is pursued with a heavy dose of personal diplomacy. An enduring visual of the second ‘informal summit’ between Chinese President Xi Jinping and Indian Prime Minister Narendra Modi in the ancient southern Indian port of Mamallapuram on October 11-12 was of the two holding hands aloft in front of a gigantic circular granite boulder on a hilly slope which has miraculously not rolled down for the past 1200 years. The gravity-defying balance of Krishna’s butterball despite its structural vulnerability conveyed the essence of the easygoing and freewheeling summit — China and India are large, mature neighboring countries which can avoid a catastrophic crash in relations through frank interactions of Xi and Modi, who have met seventeen times in the past five years.
Source: China, India not best friends but agree strategic adjustment may prevent war between the superpowers