Charter Schools Have No Valid Claim to Public Property

January 18, 2020
Charter Schools Have No Valid Claim to Public Property

Public facilities and infrastructure are produced by the working class and people and belong to the public. They exist in order to serve the common good and to contribute to the extended reproduction of society.

This collectively-produced wealth must not be handed over to competing owners of capital who are only concerned with maximizing profit as fast as possible, regardless of the damage caused to society and the environment. Socially-produced wealth must be off limits to narrow private interests. The aims and purposes of the private sector and public sector are not the same.

Non-profit and for-profit charter schools are not public entities. It does not matter how often they are called public, the fact remains that they are inherently privatized arrangements owned-operated by unelected individuals and companies. Yet they siphon billions of dollars a year from public schools and seize billions more in public facilities and assets. Most state charter school laws are deliberately set up to facilitate this massive transfer of pubic wealth to narrow private interests. Charter schools have long functioned as pay-the-rich schemes masquerading as “schools” that “benefit kids.” 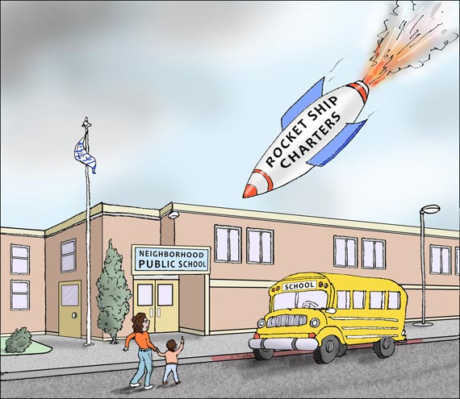 Charter school owners-operators have never stopped piously demanding that public school facilities worth millions of dollars be freely and automatically handed over to them. They righteously declare that they have an inherent right to public facilities produced by the working class. The consequences, of course, are disastrous for public schools and the public interest. For example, a new report shows that in 2018 more than $100 million was spent by New York City alone on charter school facilities.1 This is wealth and property that no longer belongs to the public that produced it; it is now in private hands, essentially for free.2 Even worse, existing institutions and arrangements provide the public with no recourse for effective redress.

One of the most recent surges in antisocial demands from charter school promoters for more public property comes from Washington D.C. where charter schools have a long record of serious problems. Charter school promoters in D.C. have launched an intense effort in recent months to lay claim to “vacant” or “unused” public school facilities worth millions of dollars. They have even cynically claimed that efforts to block them from seizing public facilities that belong to the public is tantamount to denying parents “school choice” and undermining “opportunity.” 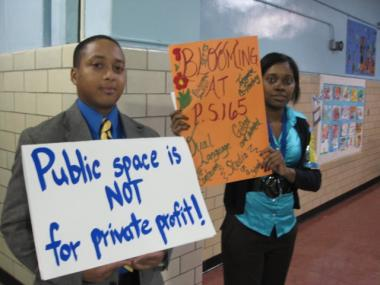 But whether public school facilities are vacant or not, whether they are being used or not, they still belong to the public, not private sector actors who own-operate segregated and de-unionized contract schools plagued by racketeering, poor performance, low accountability, discriminatory enrollment practices, high employee turnover rates, inflated administrator pay, large advertising budgets, and frequent closures. How does any of this benefit the public?

In the final analysis, public facilities and assets belong to the public and no one else. They must remain under full public control at all times and be put only in the service of the public interest.

Private sector claims on public wealth and assets are alien claims that must be vigorously rejected and blocked. Instead of trying to prop up contract schools owned-operated by narrow private interests, all levels of government and all leaders should step up efforts to ensure that all public schools are fully-funded, free of high-stakes standardized tests, devoid of Skinnerian practices, and filled with teachers who have real decision-making power. 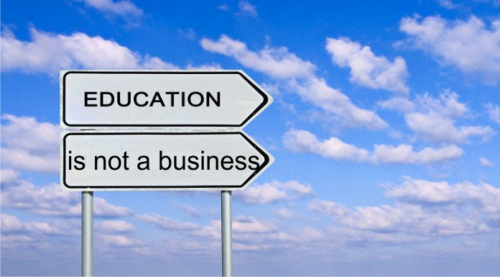 Education is not a commodity or a business. It cannot be treated as a consumer good, a privilege, an “opportunity,” or reduced to “parental choice,” especially in a modern society based on mass industrial production. Governments at all levels must take up their social responsibility to provide the right to education with a guarantee in practice. If charter schools wish to exist, they can do so on their own dime.

Source: Charter Schools Have No Valid Claim to Public Property