Steadily mounting opposition to privately-operated nonprofit and for-profit charter schools is inevitable and becoming a bigger thorn in the side of nervous neoliberals, privatizers, and corporate school reformers.

Terrified of discussion, investigation, and analysis, and hell-bent on privatizing schools, no matter the cost to society, on September 11, 2019, “Chiefs for Change” issued a letter righteously and arrogantly demanding that everyone blindly submit to the destructive neoliberal agenda of privatizing schools to further enrich major owners of capital. 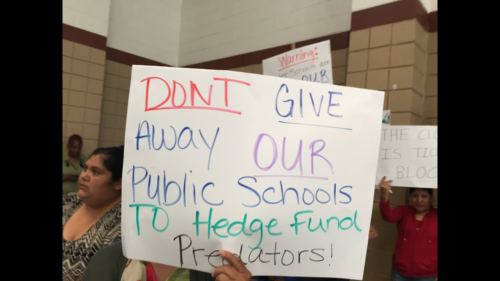 “Chiefs for Change” has been around since January 2015 and is comprised of dozens of aggressive privatizers and corporate school reformers (“educators”) masquerading as “bold nonpartisan innovators.”

While “Chiefs for Change” casually admits that there are many “school choice systems that have been largely unmonitored and often unaccountable, or that have increased the racial and economic isolation of students,” the organization desperately wants the public to suspend all critical thinking, blindly support school privatization, and automatically believe that “Chiefs for Change” simply wants what is best for students and is not concerned with financially enriching themselves and their allies. “Chiefs for Change”  is vehemently opposed to any critique, rejection, and roll-back of pay-the-rich schemes like charter schools.

Not surprisingly, in their self-serving September 11, 2019 call, “Chiefs for Change” makes no mention of the need to fund public schools properly, to stop scapegoating and humiliating public schools, to eliminate punitive high-stakes testing, or deal seriously with inequality, poverty, and segregation. Everything is approached from the antisocial perspective of parents and students fending for themselves like individuals and consumers. In this outmoded view, the best parents and students can do is shop for a school that “works for them” and hope that  it does not close a few months later for corruption, mismanagement, or poor academic performance.

The public can and must reject the toxic rhetoric, demagoguery, and agenda of the rich and their entourage. Privatization does not serve the public interest.