With each passing day of the coronavirus pandemic, it’s becoming more and more clear that the United States is following the “Wuhan plan” for how to contain coronavirus infections: Avoiding testing people, and you can then avoid reporting any “confirmed infections.”

Given the tens of thousands of Chinese nationals entering the United States of America every month, the thousands of Chinese students and the many thousands of residents who are under “observation” by state health authorities in places like Washington and California, a reasonable person might expect that the CDC has so far tested at least 10,000 people for the CoVid-19 coronavirus. But guess how many the CDC has actually tested?

To the great shock of anyone paying attention, the CDC’s own website admits the agency has tested only 414 people in the entire country. 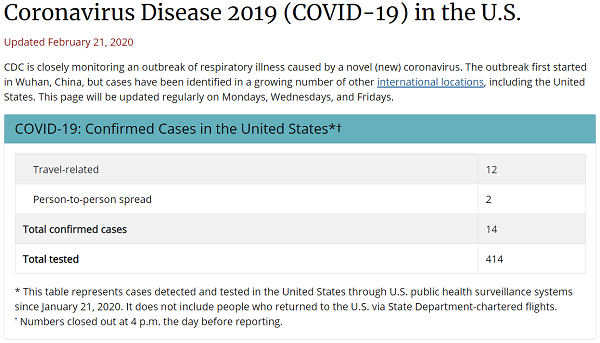 As a lab science director myself, I find this number especially surprising given that most PCR genetic analysis instruments use sample well plates that allow for batch testing of 96 samples at a time. The sample trays for this are called “96-well plates,” and they’re standard across all laboratories that conduct gene sequencing testing / PCR analysis.

This means the entire number of cases tested by the CDC could fit in fewer than five instrument runs, at a cost of only a few thousand dollars in total (including the sample prep media, pipette tips, etc.).

The number is so small, I could have run these tests in my own lab with a single gene sequencer instrument from Thermo, which only costs about $150,000.

So out of $6.6 billion, they can’t find the means to test more than a few hundred Americans for the coronavirus?

That’s insane. But it gets worse…

Remember the thousands of coronavirus test kits the CDC sent to every state in America? No one is using them (because NONE of them work)

As you may recall, it was just a little over two weeks ago that the mainstream media celebrated the CDC sending thousands of “rapid coronavirus diagnostic test kits” to hospitals and labs all across America.

As Fox News reported on Feb. 5, “[T]he test — 2019-nCoV Real-Time RT-PCR Diagnostic Panel — will be available to state public laboratories after the FDA issued a so-called ’emergency use authorization’ on Tuesday.”

We now know that nobody is using the test kits anywhere in America.

A few days after they were sent out, the CDC’s Dr. Nancy Messonnier announced the test kits were faulty and had a “bad reagent” component that produced false negatives and false positives. In other words, the test results were wildly invalid, so the test kits had to be completely scrapped.

The CDC claimed that “some” of the test kits they sent out were flawed, failing to mention that all of them were flawed. “Some of the coronavirus testing kits distributed to state labs around the US do not work properly, according to the Centers for Disease Control and Prevention,” reported the NY Post on Feb. 13th, about a week after the labs received the kits and realized they didn’t work. “Some of the kits, which also were sent to at least 30 countries, produced “inconclusive” results because of flawed components — and the CDC said it planned to send replacements to make them work.”

Yes, they sent faulty kits to 30 countries. And then they claimed “some” of them didn’t work. But in the world of epidemiology, if you don’t know which test kits are faulty vs. accurate, then you can’t trust any of them.

The entire lot of diagnostic test kits is a total joke, in other words. But it’s a really clever way to make sure no reliable tests are being done in those 30 countries that received the kits…