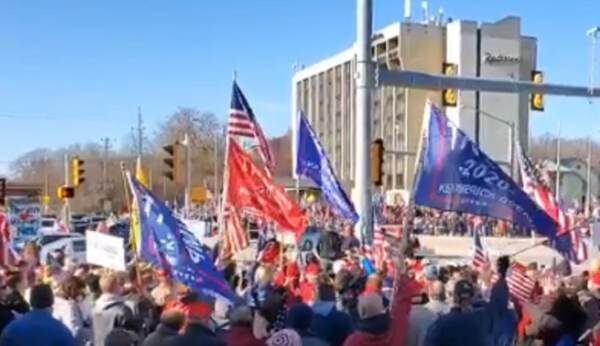 A belligerent Democrat plowed through a crowd of Trump supporters rallying in Wauwatosa, Wisconsin, on Saturday — injuring at least one person. Proud Boys administered first aid to the injured until EMTs arrived. A witness at the scene who first contacted Gateway Pundit about the incident wrote that “I was at the Wauwatosa protest today and a man was purposely hit by a car while standing next to me. Proud Boys promptly administered first aid until an ambulance arrived.” He added that the “Proud Boys did an excellent job of keeping the peace.” Gateway Pundit reached out to Proud Boys Chairman Enrique Tarrio, who confirmed that there was an incident with a driver at the rally.
Source: Biden supporter plows vehicle through Trump rally in Wauwatosa, Wisconsin, Proud Boys administer aid to the injured