BEST OF THE WEB: In The Western Media Narrative, Terrorist-Run Prisons And Underground Bunkers Become “Hospitals” 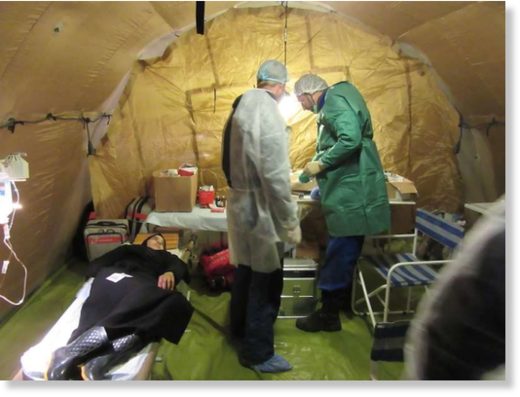 In recently liberated Qalaat Al Madiq – 500 meters from As Suqaylabiyah, a predominantly Christian town near Syria’s embattled Idlib province – the White Helmets, a controversial rescue group financed primarily by the U.K. Foreign Office, was found to have an established presence in a network of tunnels. The tunnels zigzagged under a former wheat factory that had since been converted into a headquarters of Nusra Front/HTS – Al Qaeda in Syria. This has been a pattern repeated in many of the areas liberated from extremist groups in Syria: a White Helmets presence alongside the Nusra Front, or whichever extremist group happens to dominate specific districts of the occupied territories. Invariably, the majority of the White Helmet operatives departed upon the seemingly endless stream of green buses that carried the various cadres of armed groups from liberated regions of Syria into Idlib.
Source: BEST OF THE WEB: In The Western Media Narrative, Terrorist-Run Prisons And Underground Bunkers Become “Hospitals”