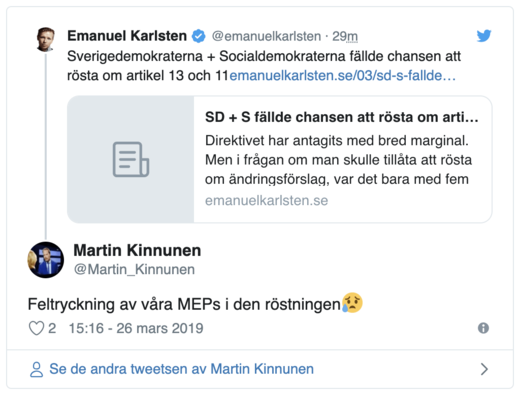 In the EU, if a Member of the Parliament presses the wrong button on a vote, they can have the record amended to show what their true intention was, but the vote is binding. Today, the European Parliament voted to pass the whole Copyright Directive without a debate on Articles 11 and 13 by a margin of five votes. But actually, a group of left-leaning Swedish MEPs have revealed that they pressed the wrong button, and have asked to have the record corrected. They have issued a statement saying they’d intended to open a debate on amendments to the Directive so they could help vote down Articles 11 and 13.
Source: Article 13 will wreck the internet because Swedish MEPs accidentally pushed the wrong voting button (allegedly)