Are the world’s biggest powers prepping for something huge?

August 4, 2019
Are the world’s biggest powers prepping for something huge? 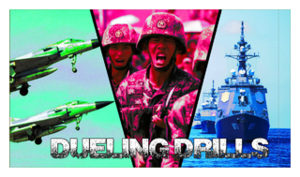 Are you keeping your eye on the news? Have you noticed any worrying patterns lately? Do you get the sense that we’re drifting towards war? And not just another Libya-style “destroy the country and leave” war, but an all-out war war? Don’t worry, you’re not the only one. There have been any number of developments in the last few weeks alone that feed into this narrative. There was the tit-for-tat tanker seizures between Britain and Iran last month (with the MSM memory holing Britain’s tit in the reporting on Iran’s tat, of course), which has enabled the always-insightful Russian Foreign Ministry to conclude that the US “is simply looking for a pretext to whip up the situation” in the Persian Gulf (shocking, I know). There is the still-escalating situation in Hong Kong, where US-backed regime change NGOs and authentically angry Hong Kongers are struggling against Beijing’s encroachment on their regional autonomy (with China now warning the US to mind its own beeswax in the matter)….
Source: Are the world’s biggest powers prepping for something huge?