Anti-Netanyahu protests resume in Jerusalem, across Israel, in shadow of right-wing violence

October 18, 2020
Anti-Netanyahu protests resume in Jerusalem, across Israel, in shadow of right-wing violence 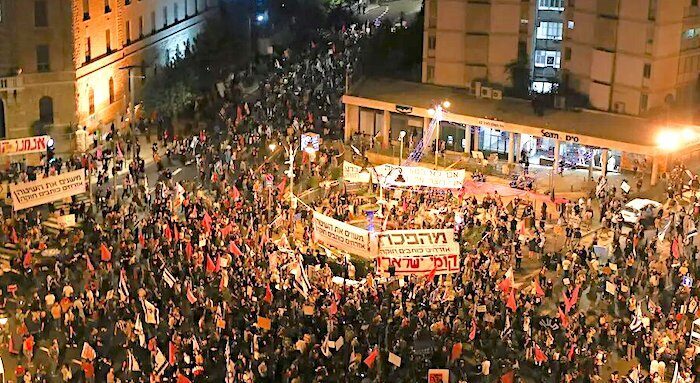 Protests renewed in Jerusalem Saturday after a two-week hiatus due to coronavirus restrictions, with 10,000 Israelis calling for Prime Minister Benjamin Netanyahu’s resignation, while thousands more protested across the country. Violent attacks on protesters were reported around the country. Protesters in Haifa, Jerusalem and Ramat Gan were sprayed with pepper spray. Police have arrested seven suspects in the attacks. Police arrested nine protesters in Jerusalem after hundreds of people started marching toward the city center. About a thousand protesters managed to evade the police and march through central Jerusalem. Together, they are proceeding towards the market and from there to the Knesset.
Source: Anti-Netanyahu protests resume in Jerusalem, across Israel, in shadow of right-wing violence