Alibaba Group’s CEO Daniel Zhang warned Thursday that the Covid-19 outbreak in China is developing into a “black swan event” that could have severe consequences for China and the global economy.

Zhang told analysts during a conference call that the company’s fiscal third-quarter results beat expectations but warned of near-term impacts related to the deadly virus outbreak.

He said Alibaba’s revenue jumped 38% YoY for the quarter and promoted “robust growth” due to a record Single’s Day.

Alibaba Group’s CFO Maggie Wu said it’s “too early to quantify the impact” Covid-19 will have on its business and other operating segments across Asia. 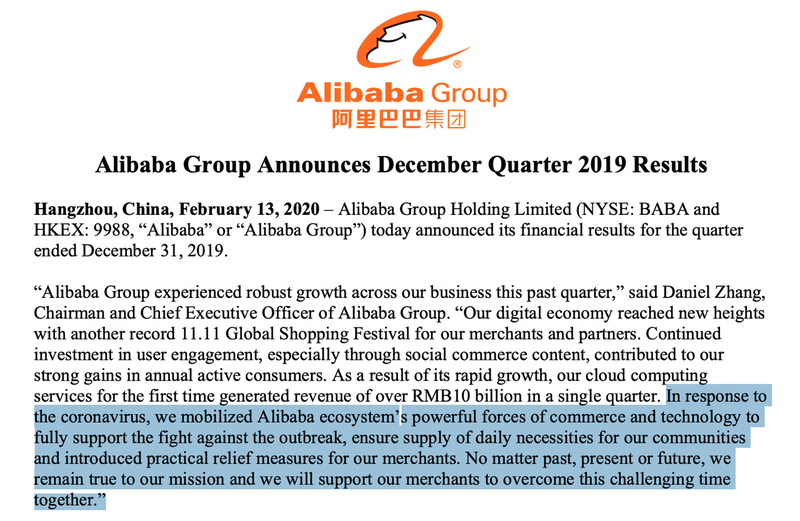 Wu said the virus shuttered major manufacturing hubs across the country and led to hundreds of millions of people in quarantine.

She said demand for goods and services has declined, and the delay of the workforce getting back to work could further hinder economic growth.

Wu suggested that Alibaba is “not immune to this imbalance of supply and demand,” otherwise known as a “shock,” but says the company sees an opportunity in the virus crisis (a great way to spin it).

She emphasized the outbreak is a “one-off occurrence” and by “helping customers through difficult times” that enables the company to drive long-term growth. But she provided no timetable of when the company thinks the confirmed cases and deaths will peak.

However, there’s only so much the company can spin by pushing investors away from looking at short term impacts by giving them optimistic views about the distant future.

Wu said overall revenue growth for 1Q would be negative as the economic shock from the virus has already shut down two-thirds of the Chinese economy.

The shock Alibaba is warning about was also outlined last month by former Morgan Stanley Asia chairman Stephen Roach, in which he said the global economy could already be in a period of vulnerability, where an exogenous shock, such as the Covid-19, could be the trigger for the next worldwide recession.

The “black swan” warning was also repeated by Freeport-McMoRan CEO Richard Adkerson several weeks ago after he said the outbreak of the virus in China is a “real black swan event” for the global economy.

And why are corporations and a former top investment manager warning about “black swan” events in China and across the world?

Well, it’s because as China’s economy screeches to a halt, so will the world. This comes at a time when central bank ammo to thwart below-trend growth has been exhausted.

And what’s next for Alibaba’s stock, well, mounting evidence shows it could be topping…