A Universal Basic Income Is Essential and Will Work

April 21, 2020
A Universal Basic Income Is Essential and Will Work

According to an April 6 article on CNBC.com, Spain is slated to become the first country in Europe to introduce a universal basic income (UBI) on a long-term basis. Spain’s Minister for Economic Affairs has announced plans to roll out a UBI “as soon as possible,” with the goal of providing a nationwide basic wage that supports citizens “forever.” Guy Standing, a research professor at the University of London, told CNBC that there was no prospect of a global economic revival without a universal basic income. “It’s almost a no-brainer,” he said. “We are going to have some sort of basic income system sooner or later ….”

“Where will the government find the money?” is no longer a valid objection to providing an economic safety net for the people. The government can find the money in the same place it just found more than $5 trillion for Wall Street and Corporate America: the central bank can print it. In an April 9 post commenting on the $1.77 trillion handed to Wall Street under the CARES Act, Wolf Richter observed, “If the Fed had sent that $1.77 Trillion to the 130 million households in the US, each household would have received $13,600. But no, this was helicopter money exclusively for Wall Street and for asset holders.”

“Helicopter money” – money simply issued by the central bank and injected into the economy – could be used in many ways, including building infrastructure, capitalizing a national infrastructure and development bank, providing free state university tuition, or funding Medicare, social security, or a universal basic income. In the current crisis, in which a government-mandated shutdown has left households more vulnerable than at any time since the Great Depression, a UBI seems the most direct and efficient way to get money to everyone who needs it. But critics argue that it will just trigger inflation and collapse the dollar. As gold proponent Mike Maloney complained on

How Much Money Needs to Be Injected to Stabilize the Money Supply?

The mandated shutdown from the coronavirus has exacerbated the debt crisis, but the economy was suffering from an unprecedented buildup of debt well before that. A UBI would address the gap between consumer debt and the money available to repay it; but there are equivalent gaps for business debt, federal debt, and state and municipal debt, leaving room for quite a bit of helicopter money before debt deflation would turn into inflation.

Looking just at the consumer debt gap, in 2019 80% of US households had to borrow to meet expenses. See this chart provided by Lance Roberts in an April 2019 article on Seeking Alpha:

After the 2008 financial crisis, income and debt combined were not sufficient to fill the gap. By April 2019, about one-third of student loans and car loans were defaulting or had already defaulted. The predictable result was a growing wave of personal bankruptcies, bank bankruptcies, and debt deflation.

Roberts showed in a second chart that by 2019, the gap between annual real disposable income and the cost of living was over $15,000 per person, and the annual deficit that could not be filled even by borrowing was over $3,200: 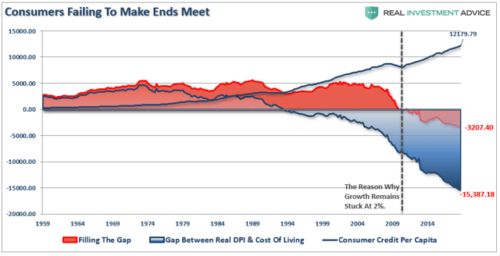 Assume, then, a national dividend dropped directly into people’s bank accounts of $1,200 per month or $14,200 per year. This would come close to the average $15,000 needed to fill the gap between real disposable income and the cost of living. If the 80% of recipients needing to borrow to meet expenses used the money to repay their consumer debts (credit cards, student debt, medical bills, etc.), that money would void out debt and disappear. These loan repayments (or some of them) could be made mandatory and automatic. The other 20% of recipients, who don’t need to borrow to meet expenses, would not need their national dividends for that purpose either. Most would save it or invest it in non-consumer markets. And the money that was actually spent on consumer goods and services would help fill the 10% gap between real and potential GDP, allowing supply to rise with demand, keeping prices stable. The end result would be no net increase in the consumer price index.

The current economic shutdown will necessarily result in shortages, and the prices of those commodities can be expected to inflate; but it won’t be the result of “demand/pull” inflation triggered by helicopter money. It will be “cost/push” inflation from factory closures, supply disruptions, and increased business costs.

Critics of central bank money injections point to the notorious hyperinflations of history – in Weimar Germany, Zimbabwe, Venezuela, etc. These disasters, however, were not caused by government money-printing to stimulate the economy. According to Prof. Michael Hudson, who has studied the question extensively, “Every hyperinflation in history has been caused by foreign debt service collapsing the exchange rate. The problem almost always has resulted from wartime foreign currency strains, not domestic spending.”

For contemporary examples of governments injecting new money to fund domestic growth, we can look to China and Japan. In the last two decades, China’s M2 money supply grew from 11 trillion yuan to 194 trillion yuan, a nearly 1,800% increase. Yet the average inflation rate of its Consumer Price Index hovered between 2% and 3% during that period. The flood of money injected into the economy did not trigger an inflationary crisis because China’s GDP grew at the same fast clip, allowing supply and demand to rise together. Another factor was the Chinese propensity to save. As incomes went up, the percent of income spent on goods and services went down.

In Japan, the massive stimulus programs called “Abenomics” have been funded through bond purchases by the Japanese central bank. The Bank of Japan has now “monetized” nearly half the government’s debt, injecting new money into the economy by purchasing government bonds with yen created on the bank’s books. If the US Fed did that, it would own $12 trillion in US government bonds, over three times the $3.6 trillion in Treasury debt it holds now. Yet Japan’s inflation rate remains stubbornly below the BOJ’s 2% target. Deflation continues to be a greater concern in Japan than inflation, despite unprecedented debt monetization by its central bank.

UBI and Fears of the “Nanny State”

Wary critics warn that a UBI is the road to totalitarianism, the “cashless society,” dependence on the “nanny state,” and mandatory digital IDs. But none of those outcomes need accompany a UBI. It does not make people dependent on the government, so long as they can work. It is just supplementary income, similar to the dividends investors get from their stocks. A UBI does not make people lazy, as numerous studies have shown. To the contrary, they become more productive than without it. And a UBI does not mean cash would be eliminated. Over 90% of the money supply is already digital. UBI payments can be distributed digitally without changing the system we have.

A UBI can serve the goals both of fiscal policy, providing a vital safety net for citizens in desperate times, and of monetary policy, by stabilizing the money supply. The consumer/producer economy actually needs regular injections of helicopter money to remain sustainable, stimulate economic productivity, and avoid deflationary recessions.

Source: A Universal Basic Income Is Essential and Will Work